Canadian Tire Options Mastercard: After In Store Approval, Use Apple Pay Instantly [u]

Canadian Tire Bank, the financial arm of retailer Canadian Tire, has announced their Options Mastercard is now available for Apple Pay, upon immediate application approval. This makes the Options Mastercard the first credit card in Canada to enable Apple Pay as soon as you are approved in stores, without the need to wait for your physical card to arrive in the mail (updated). 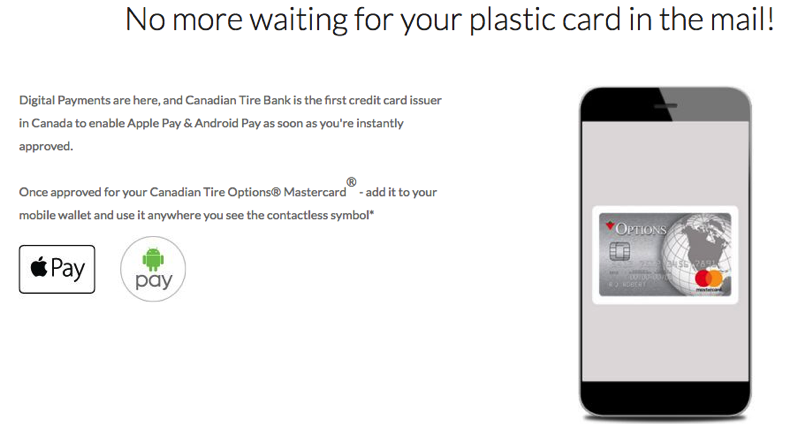 According to an email to iPhone in Canada from the company:

In a few simple steps, customers can load their new Options MasterCard onto their Apple or Android digital wallet as soon as they’re approved for credit in stores. That means, they no longer have to wait for the plastic card to arrive in the mail to begin using their credit cards. The mobile payment solution can be used the same day at Canadian Tire, Sport Chek and Mark’s stores, as well as anywhere tap payments are accepted for purchases up to $100.

The service also launches for Android Pay as well. Let us know if you’re going to be getting an Options Mastercard from Canadian Tire.

Update: article clarified the update today is about Digital Instant Issuance, meaning users can add cards to Apple Pay immediately after being approved, without the need to wait for a physical card in the mail.

Terry Gou, the founder of Apple supplier Foxconn, was instrumental in convincing the Chinese government to ease COVID-19 restrictions in the country, which were significantly affecting iPhone production — reports The Wall Street Journal. The information comes from unnamed sources familiar with the proceedings. According to the report, Gou sent Chinese leaders a letter over...
Nehal Malik
52 mins ago