According to a new report by the Canadian Radio-television and Telecommunications Commission (CRTC), the use of streaming services is growing at a steady pace in Canada, whereas the conventional forms of broadcasting are declining, CBC News reports. The CRTC’s annual report notes that almost half of Canadians subscribed to some sort of online video service, such as Netflix, CraveTV and others during last year. 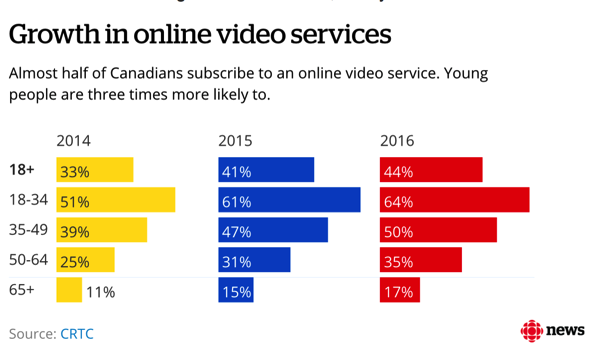 Almost two-thirds of Canadians between the age of 18 and 34 years subscribe to a streaming service. CRTC chair Ian Scott said this year’s report highlights how much younger Canadians are turning to digital platforms for their audio and visual content.

“That being said, traditional broadcasters are adapting to this reality and their services continue to be attractive options for many Canadians”, Scott added. The report notes that 22% of Canadians aged 18 years or older streamed radio stations online last year, while more than 55% streamed music videos on internet-based services, including Spotify, Apple Music and others.

Indeed, Canadian cable, IPTV (internet-protocol TV) and satellite television companies still had a total of 11.1 million subscribers last year. That’s a 1.1-per-cent decline from the previous year’s level, but the IPTV portion within that grew by 13.8 per cent during the year, adding more than 300,000 new customers in the past 12 months.

While the digital space is growing quickly, Canadians are still spending a lot of time consuming conventional media, too. Canadians watched on average 26.6 hours per week of traditional television last year, compared to 27.2 hours in 2015. Canadians aged 65 and over watched the most television at 42.8 hours per week.

How often do you find your self consuming conventional media nowadays?