China is Now the Largest Market for the App Store

The US had been the biggest iOS market since 2010 but ceded the top position to China in the third quarter, with App Store revenue earning over $1.7 billion, according to App Annie. 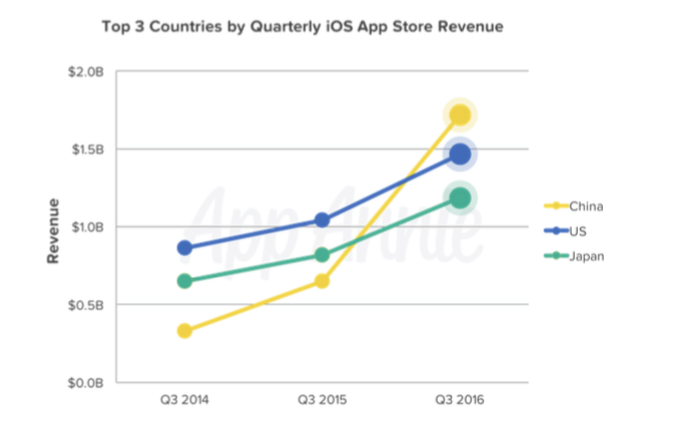 The market research firm says China surpassed the US by over 15% in the third quarter, as Chinese customers spent more than five times the amount they spent just two years ago in the iOS App Store. App Annie predicts that China will drive the largest revenue growth for any country by 2020.

Games are very popular worldwide, and China is no exception. Revenue from games accounts for the majority of revenue generated in China, while other categories such as Entertainment and Social networking have tripled revenue in the past year, says the report.

Social networking is one of the fastest-growing categories for iOS revenue in China, with video streaming posing as a potential mainstream component of social networking apps.

As some of you may already know, the Pokémon GO launch was the most successful app launch to date. The app achieved unprecedented global revenue and engagement success in record time: It has reached $600 million consumer spend faster than any app to date. It outpaced Clash of Titans by more than 6.2 times in less than three months.

You can explore all the key trends and others in App Annie Index: Market Q3 2016 on the market research firm’s website.

Google on Tuesday announced new product updates, and its latest includes the debut of the Nest Wifi Pro with Wi-Fi 6E support, the first router from the company that is triband mesh network ready. Wi-Fi 6E (E for Extended) leverages the new less-crowded 6 GHz radio band and offers speeds up to two-times faster than […]
Gary Ng
15 mins ago

Google today announced a major update for the Google Home app that brings a fresh new design, Matter integration, support for both Wear OS and the web, and plenty of new features. The company said it set out to reimagine Google Home because the number of average connected devices per user has gone up from...
Nehal Malik
37 mins ago