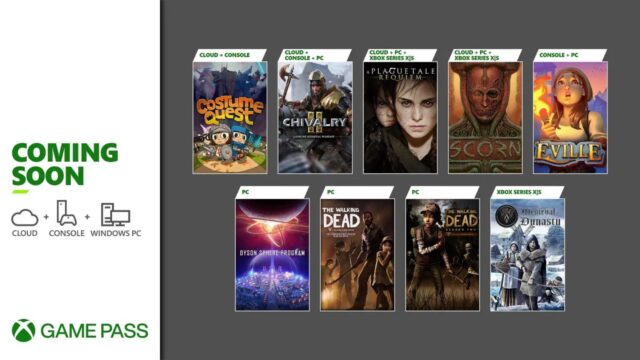 Microsoft has revealed the first wave of Xbox Game Pass titles arriving on the service throughout October 2022. Kicking off the month, many of the games capture the spirit of the spooky season, leading into Halloween.

This month, Xbox Game Pass subscribers can gain access to brand new titles available day and date such as Scorn, Chivilary 2, and A Plague’s Tale: Requiem. While Scorn is undoubtedly set to send chills down the spines of players, subscribers can get into the Halloween spirit with the cult classic Costume Quest and Telltale’s The Walking Dead: The Complete First Season.

For those that may not know, Xbox Game Pass grants access to an ever-expanding and rotating catalog of games. This includes first-party titles like Halo Infinite, Forza Horizon 5, and Psychonauts 2. Xbox Game Pass Ultimate also incorporates additional perks like Xbox Cloud Gaming, access to EA Play, and more.

Here are the Xbox Game Pass titles arriving throughout the first half of October 2022:

Chivalry 2 is a multiplayer, first-person slasher inspired by epic medieval movie battles. You’ll be thrust into the action of every iconic moment of the era – from clashing swords to storms of flaming arrows, to sprawling castle sieges, and more. Charge into battle on horseback and claim glory with your blade!

Available now with PC Game Pass and coming soon to Xbox Series X|S. In Medieval Dynasty, you take on the role of a young man who has fled from war and wants to take his fate into his own hands. From being alone, inexperienced, and poor, you will develop into a master of many skills, a leader of your community, and the founder of a prosperous dynasty that is meant to last and prosper for generations to come.

A five-part game series set in the same universe as Robert Kirkman’s award-winning comic book series. Play as Lee Everett, a convicted criminal, who has been given a second chance at life in a world devastated by the undead. Experience events, meet people and visit locations that foreshadow the story of Deputy Sheriff Rick Grimes.

The Walking Dead: Season Two continues the story of Clementine, a young girl orphaned by the undead apocalypse. Left to fend for herself, she has been forced to learn how to survive in a world gone mad. Meet new survivors, explore new locations, and make gruesome decisions in this five-part game series of choice and consequence.

Rediscover Halloween in this imaginative RPG from Tim Schafer’s Double Fine Productions. Explore the monster-filled neighborhood of Auburn Pines, Autumn Haven Mall, and Fall Valley Carnival. Collect magical costumes with superpowers, unique weapons, and special items as you hunt down quests. Level up your heroic warrior and battle the evil overlords in this epic adventure to save Halloween!

Betray your friends – and lie your way to victory. In the multiplayer social deduction game Eville you find yourself in a village riddled with a series of murders. Some say it might have been you – or was it? Convince others you’re not a murderer to stay alive!

Scorn is an atmospheric first-person horror adventure game set in a nightmarish universe of odd forms and somber tapestry. It is designed around the idea of “being thrown into the world.” Isolated and lost inside this dream-like world, you will explore different interconnected regions in a non-linear fashion.

In this direct sequel to A Plague Tale: Innocence, embark on a heartrending journey into a brutal, breathtaking world, and discover the cost of saving those you love in a desperate struggle for survival. Strike from the shadows or unleash hell with a variety of weapons, tools, and unearthly powers.

Be sure to take a look at the games that hit Xbox Game Pass in September as well.