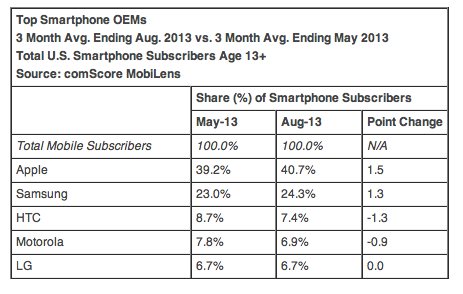 The most recent data shows that smartphone adoption is on the rise. It has reached  60.8% mobile market penetration, with about 145 million people in the United States owning a smartphone. The most popular smartphone of choice remained Apple, with 40.7% of U.S. smartphone subscribers opting for an iPhone (up 1.5%). Samsung is in second place, with 24.3% of market share, while HTC ranked No. 3 with 7.4%.

As comScore points out, Google Sites ranked as the top web property on smartphones, seconded only by Facebook (84.6%) while Yahoo! sites ranked No. 3 with 83.2% of the mobile media audience.

Tesla CEO Elon Musk looks to be giving up on terminating his $44 billion USD bid for social media giant Twitter, now proposing to go through with the acquisition on the original terms — reports Bloomberg. According to Bloomberg's sources, Musk proposed closing the deal for the original offer price of $54.20 USD per share...
Nehal Malik
26 mins ago

Google on Tuesday announced new product updates, and its latest includes the debut of the Nest Wifi Pro with Wi-Fi 6E support, the first router from the company that is triband mesh network ready. Wi-Fi 6E (E for Extended) leverages the new less-crowded 6 GHz radio band and offers speeds up to two-times faster than […]
Gary Ng
43 mins ago