In a recently-aired interview, Apple CEO Tim Cook reflects on his vision for the Cupertino company, his education and career path, the late co-founder Steve Jobs, and social issues such as privacy, immigration, and equality. 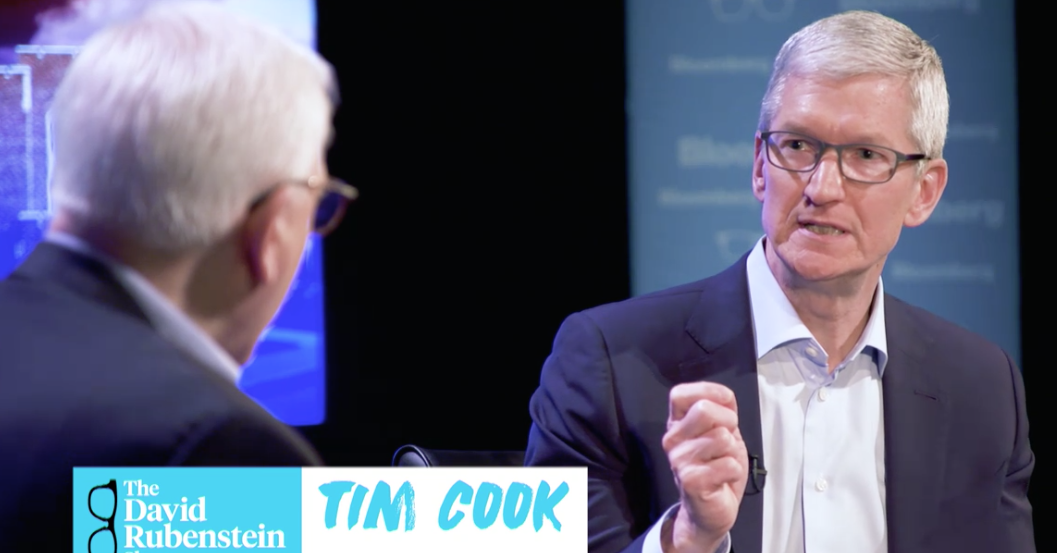 Bloomberg Television today aired the interview from The David Rubenstein Show, recorded in May at Cook’s alma mater, Duke University. The interview was conducted by Mr. Rubenstein, one of three billionaire founders of private equity firm Carlyle Group.

Speaking on his former boss and mentor Steve Jobs, Cook comments on his views on the importance of collaboration in the working environment, including the importance of the Cupertino company’s new world headquarters, Apple Park.

“Steve had the vision that the workplace should facilitate people working together having these common areas that people could work together and run into each other without planning on doing it,” Cook explained. “The level of ideas and creativity and innovation that would come out of that would be phenomenal.”

In regards to Apple’s performance since Cook took over CEO in 2011, Rubenstein asks whether or not the executive thinks he’s done a good job as earning are up 80 percent in that period.

“We view the stock price and revenue and profits as a result of doing things right on the innovation side, on the creativity side, focusing on the right products, treating customers like they are jewels, and focusing on the user experience,” answers Cook. “I didn’t even know the numbers that you just quoted. It’s not even in my orbit, to be honest with you.”

The interview also touched on Apple’s philosophy regarding privacy, with Cook insisting it was viewed as “a fundamental human right… It’s right up there with some of the other civil liberties that make Americans what they are… We see that this is becoming a larger and larger issue for people. Our tact on this is we take a minimum amount of data from customers… only that which we need to provide a great service. Then, we work really hard to protect it with encryption and so forth.”

Rubenstein even asks Cook whether or not he’s ever considered running for the position of President of the United States, saying that he’s “obviously a public figure.”

“I’m not political,” answered Cook. “I love focusing on the policy stuff, but in the dysfunction kind of in Washington, between the legislative branch and so forth, I think I can make a bigger difference in the world doing what I’m doing. I appreciate the comment.”

Check out the entire interview in the video below.