Giving the commencement speech to the class of 2018 at Duke University, Apple CEO Tim Cook encouraged students to follow their vision and learn from the example set by late Apple founder Steve Jobs. 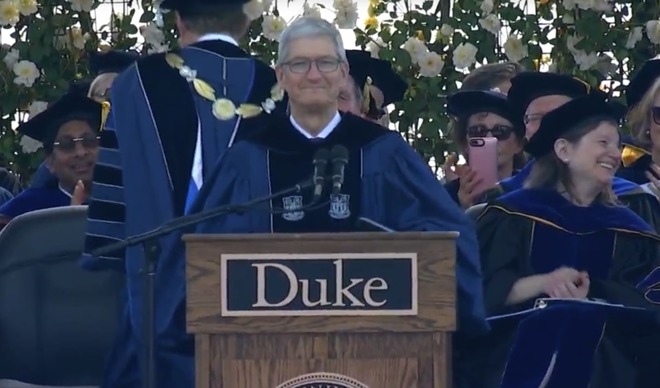 During his speech, Cook took the opportunity to acknowledge significant social and political issues like climate change, gun violence, and the #MeToo movement. He reminded graduates to be “fearless” while encouraging them to fight against injustice and inequality.

“Fearless like the students of Parkland, Florida, who refuse to be silent about the epidemic of gun violence and have rallied millions to their cause,” Cook said.

“Fearless like the women who say ‘Me Too’ and ‘Time’s Up,'” Cook said. “Women who cast light into dark places and move us to a more just and equal future.”

In his address, Cook also took a jab at Facebook’s data collection scandal by saying that Apple takes a different approach when it comes to data privacy.

“We reject the excuse that getting the most out of technology means trading away your right to privacy,” Cook said Sunday at Duke University. “So we choose a different path: Collecting as little of your data as possible. Being thoughtful and respectful when it’s in our care. Because we know it belongs to you.”

It’s pretty clear Cook’s comments are a direct attack on Facebook, whose recent slew of privacy scandals, including the Cambridge Analytica affair, have drawn bipartisan ire, and have put its leader Mark Zuckerberg on the back foot.

There was plenty of inspiration for Duke’s latest graduates, too. Drawing on inspiration from late former Apple chief Steve Jobs, whom Cook characterized as “someone who knew that changing the world started with following a vision, not a path,” he said that, “if you hope to change the world, you must find your fearlessness.

“Fearlessness means taking the first step even if you’re not sure where it will take you.”

Watch Tim Cook’s commencement speech in its entirety below.