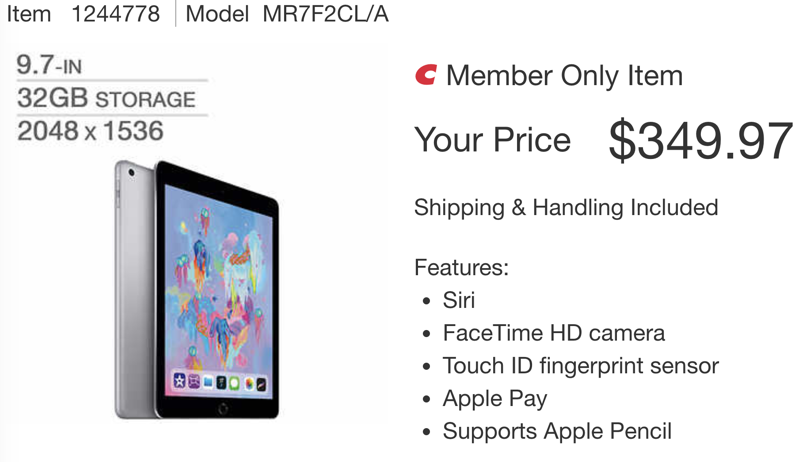 With a new product release, old versions usually go on sale and now Costco has Apple’s sixth-generation on clearance, starting at $349.97 for the 32GB Wi-Fi model.

The 128GB Wi-Fi model is priced at $499.97, with both capacities selling at the same price online (you need to sign-in to see the price) and at warehouses.

If you want to save $20 more, you can buy a refurbished sixth-generation iPad from Apple.ca for $329.

The seventh-generation iPad gains a Smart Connector, allowing the 10.2-inch tablet to connect to Apple’s Smart Keyboard. The newer tablet has a 2160 x 1620 resolution for the same 264 ppi as the predecessor, while both the 2018 iPad and 2019 iPad are powered by the same A10 Fusion chip. Apple Pencil is supported by both tablets. These are the main differences between the sixth and seventh-generation iPad.

[caption id="attachment_386668" align="aligncenter" width="800"] Image: Ledger[/caption] Tony Fadell, a famed product designer and former Apple Senior VP who is credited as being the "father of the iPod," has come out of his rather quiet life of investing and writing books about his career to lead the development of hardware cryptocurrency wallets at Paris-based Ledger. Cryptocurrency...
Nehal Malik
1 min ago

Inspired by the cultural continuum of Love Languages, Peloton has today announced the launch of Motivation Languages to help people motivate friends and family to get through the busy holiday season. Peloton recently commissioned a five-market research study that found that nearly 81% of people prioritize their loved ones, with nearly half wishing they prioritized...
Usman Qureshi
9 mins ago