Back in late 2010, Costco and Apple ended their rocky business relationship, a mutual agreement between the companies. Previously, users were able to purchase iPods, iTunes Cards and going further back, Mac computers.

Now, it appears both companies have rekindled their relationship as Costco.com now sells iPhones and iPads online, as noted by TGaap via its mobile partner Wireless Advocates, a subsidiary of Car Toys.

The CEO of Car Toys earlier in June sent an email to its Wireless Advocates employees notifying them of upcoming carrier sales of Apple’s iPhone and iPad at Costco, according to MacRumors.

The 16GB iPhone 5s is on sale for $77.99 on a two-year term with Verizon, Sprint and AT&T, while cellular versions of the iPad mini with Retina display and iPad Air are also available both online and in-store. 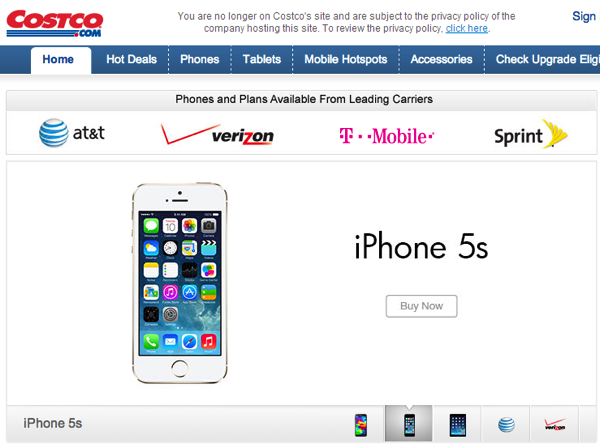 If something happens down in the U.S., it usually comes late to Canada (or never at all). There’s no word on whether Costco Canada will sell the iPhone or iPad through its Wireless Etc. kiosks (which offer Rogers, Bell, Fido, Virgin mobile, Chatr wireless and SaskTel sales), a subsidiary of Burnaby-based Glentel.

As for Apple allowing Costco.com to sell its higher-end iPhone and iPads directly, that doesn’t look like it will happen, most likely due to the big box retailer’s liberal return policy, which can be abused by those looking to take advantage of it.

We’ve reached out to Glentel and Costco Canada for comment on the matter and will provide updates when they become available.

Security researchers from HUMAN’s Satori Threat Intelligence team have identified 75 apps on Google Play and 10 apps on the App Store engaged in ad fraud, resulting in over 13 million installations (via Bleeping Computer). The researchers say they have identified a collection of mobile apps that are part of a new ad fraud campaign named 'Scylla'....
Usman Qureshi
17 mins ago

YouTuber and tech gore creator TechRax took it upon himself to give Apple's new iPhone 14 Pro a facelift in a recent video. "I can't stand the protruding camera bump," he said, preparing to saw it off. The camera island on the back of this year's iPhone 14 Pro models is larger in all directions than the...
Nehal Malik
18 mins ago

According to Bloomberg’s Mark Gurman, he believes Apple may not hold an October event to announce Mac and iPad Pro updates with M2 chips. The M2 chips were unveiled at WWDC this summer. Does Apple have enough new features still hiding to justify holding an October event with the media? “It seems unlikely,” says Gurman. […]
Gary Ng
31 mins ago