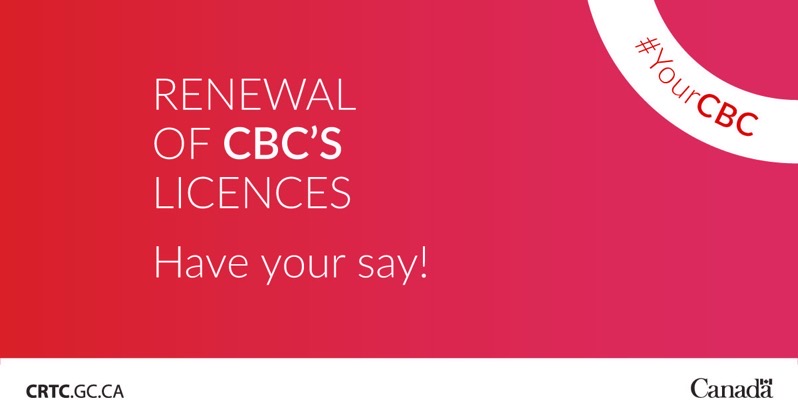 The CRTC says it wants Canadians to provide their input on the radio and TV license renewals of Canada’s public broadcaster, the CBC.

“Calling all Canadians interested in Canada’s national public broadcaster. The CBC’s radio and TV licences are up for renewal. Provide your input until 8pm EST December 9, 2019 to be part of the public record!”

The CRTC links to its Facebook page and asks Canadians to comment on a photo album, with feedback going on the public record, as one way to voice their input:

Your feedback on these questions will help us review CBC and Radio-Canada’s licences which set out requirements that the public broadcaster must meet. Note that the licence renewal is unrelated to funding provided to CBC/Radio-Canada by Parliament. Participate in the conversation by commenting on the album or on specific images illustrating the different themes. Comment on as many images as you like and return any time between now and 8 pm (EST) on December 9, 2019 to participate in the conversation! You can also view comments on our French page at www.facebook.com/crtcfra

Calling all Canadians interested in Canada’s national public broadcaster. The CBC’s radio and TV licences are up for renewal. Provide your input until 8pm EST December 9, 2019 to be part of the public record! https://t.co/RXesJj4LwO pic.twitter.com/4uYzUZeXbP


“CBC/Radio-Canada plays an important role in the lives of Canadians. As Canada’s national public broadcaster, its main objective is to provide programming that is designed to inform, enlighten and entertain. As part of our consultation, we want to hear the opinions of Canadians so that they are reflected in CBC/Radio-Canada’s programming,” said Ian Scott, Chairperson and Chief Executive Officer, CRTC, in a statement.

The CRTC says it will hold a hearing on May 25, 2020, at the Conference Centre, Phase IV, 140 Promenade du Portage, Gatineau, Quebec.

Most likely these licenses will be renewed like clockwork, but at least you had your say by commenting on a photo on Facebook, right?