New Dashlane Password Manager Changes All Your Passwords at Once

After announcing its acquisition of New York-based startup PassOmatic, password manager Dashlane has introduced a new service that can change a bunch of your passwords all at once, making your precious accounts less hackable. The automatic password changer lets users select the logins they want to update and then generates a new strong password that’s synced across all their PCs and Mac computers (via The Next Web). 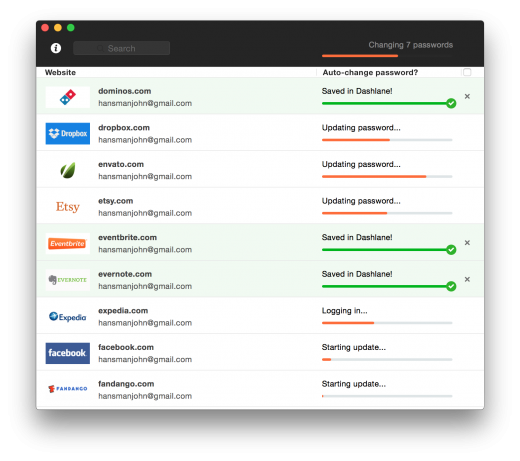 Once you open the Dashlane Password Manger, simply select the accounts you want it to change, press the change button and wait. Some sites require additional information, such as the answer to a security question or a code sent via text message, which Dashlane will prompt you to enter. The program is available today in beta and is compatible with over 50 top US sites including Amazon, Facebook, Google, Twitter, LinkedIn and Yahoo.

Dashlane’s CEO, Emmanuel Schalit told TNW he believes that Password Changer has “killed the password.” He continued: “We have created an identity layer which turns the password into a purely technical device that exists in the background but which humans don’t interact with it.”

While Password Changer has launched with a limited list of supported sites, Schalit says it will grow rapidly: “We have the mechanics to grow to several hundred and then a few thousand sites. For the top 1,000 websites to change those passwords automatically, you’ve already solved a lot of the problems. These are the sites that are most targeted by hackers.”

Dashlane says it will introduce a recurring password change feature in the near future, which will be available to users at $39.99 per year for syncing across unlimited devices.