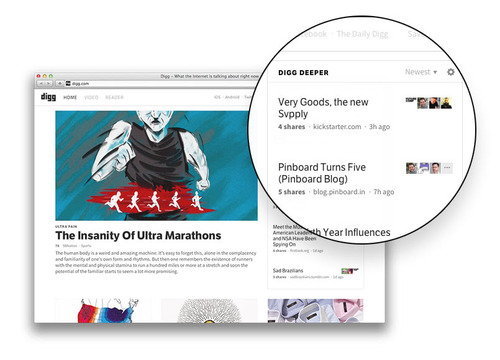 Digg has unleashed its new feature called Digg Deeper for the masses and it has been added as an update to the Digg iOS app (you’ll be prompted to connect your Twitter account and allow push alerts).

Once you connect your Twitter account to Digg Deeper, you’ll get push alerts when your followers start sharing viral content such as stories or videos—this way the most important tweets get sent to you when it happens so you don’t miss out.

Digg Deeper is also available on Digg’s web homepage in a personalized section, determined by algorithms that curate the “most compelling, and highly-discussed stories and videos”.

So why use Digg Deeper? Think of it as having your own personal team of Digg editors who alert you to the most important things from your Twitter universe so you don’t ever feel that you’re missing anything. And unlike our real editors, it’s free.

Digg says Digg Deeper will soon be integrated into Digg Reader, but for now it’s available on the web and their iOS app only.

I’ve just set this up and it’ll be interesting to see how it works compared to @MagicRecs. When you’re not following your timeline like a crack fiend, this service might come in handy.