Dr. Mario World, Nintendo’s fifth game for mobiles that has been available globally on iOS and Android for less than a week, surpassed 2 million downloads in its first 72 hours after launch and is already the No. 1 free iPhone app in Japan and No. 6 in the U.S., according to Sensor Tower Store Intelligence data.

The source notes that the performance of Dr. Mario World in terms of downloads so far is not surprising, given that it is not one of Nintendo’s top tier franchises like Super Mario, Fire Emblem, and Animal Crossing. The data also shows that players spent more than $100,000 on Dr. Mario World’s in-app purchases in the first 3 days. 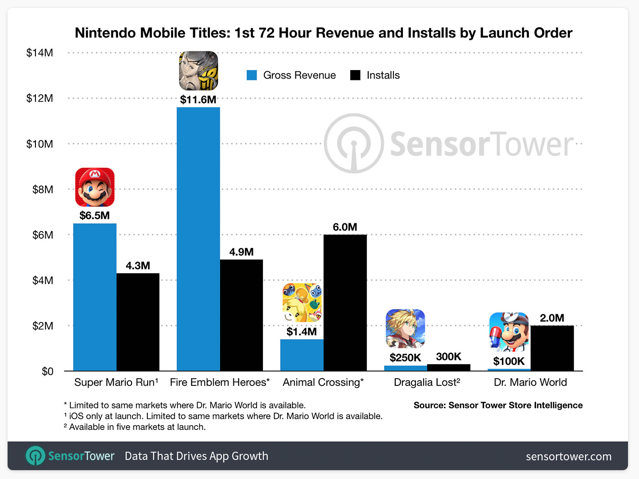 The above chart compares how Dr. Mario World’s first 72 hours stack up against Nintendo’s four previous mobile game launches, placing its total downloads at about half of Super Mario Run’s iOS-only figure of 4.3 million and that of Fire Emblem Heroes at 4.9 million.

“Analyzing Dr. Mario World’s revenue thus far, we see that it is the lowest grossing of Nintendo’s mobile releases at this point in its launch window at an estimated $100,000 spent by players. By comparison, Fire Emblem Heroes took in $11.6 million in the same markets during this period, while Dragalia Lost’s five markets generated $250,000 in spending in its first 72 hours.”

It must also be kept in mind that Dr. Mario World did not receive the same degree of pre-launch marketing as Nintendo’s other franchises prior to their arrival on mobile.