Dr. Dre, Jimmy Iovine Would Have Senior Roles at Apple with Beats Acquisition 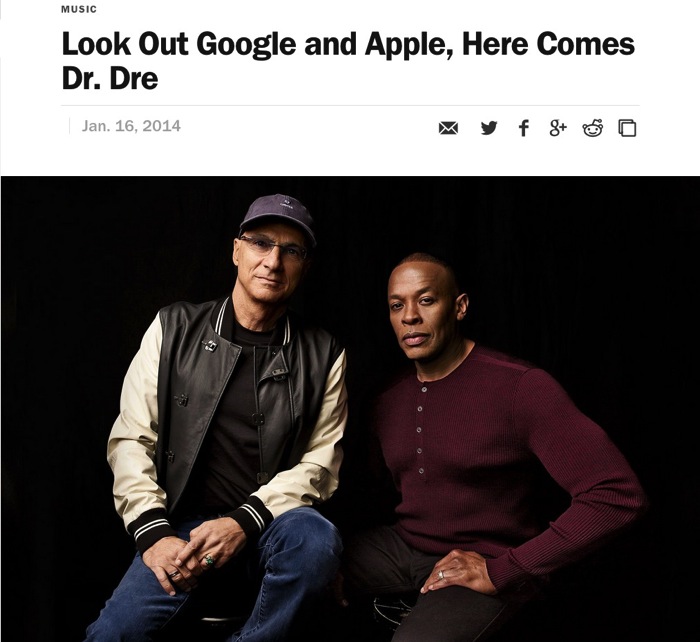 The Wall Street Journal reports sources says both Dr. Dre and Jimmy Iovine, co-founders of Beats Electronics, would join Apple in ‘senior’ positions should the latter acquire the company in the rumoured $3.2 billion deal:

Mr. Iovine and his co-founder, rap star Dr. Dre, both men are likely to take senior positions with the Cupertino, Calif., tech company, according to people familiar with the matter, commuting from the Los Angeles area to Silicon Valley—or meetings elsewhere—as needed.

A person familiar with the matter also says Iovine would depart from his current position as chairman at Interscope as he transition to work at Apple:

Assuming Apple seals the deal to buy Beats, Mr. Iovine will leave his longtime post as chairman of Interscope Geffen A&M records, a division of Vivendi SA’s Universal Music Group, according to a person familiar with the matter, though it isn’t clear how soon he would depart.

The WSJ says Universal, the parent company of Interscope which also has a 14% stake in Beats (and is set to make almost $500 million if the deal goes through), would supposedly let Iovine leave his position prematurely before his contract, which expires in early 2015.

Reuters corroborates the WSJ story by saying a source familiar with the deal says Iovine would similarly leave his record label post to run Beats at Apple, most likely to help launch a music subscription service:

A source familiar with the deal said Iovine would likely leave his record label and join Apple to run Beats, but it hasn’t been determined if he would take on a greater role. It also isn’t yet clear whether Beats would operate as an independent unit or to whom its executives would report.

If you haven’t seen it already, I highly recommend you watch Jimmy Iovine chatting with Walt Mossberg from the D: Dive into Mobile conference; it will shed some light about the vision Iovine has long believed for the future of music.

Earlier in the day Dr. Dre already ‘confirmed’ the Beats deal in a video posted to actor Tyrese’s Facebook page, which was subsequently taken down (but is still alive thanks to the interwebs).

9to5Mac points us to a video of Steve Jobs chatting with Dr. Dre over iChat at an Apple event from over a decade ago regarding the iPod and iTunes; Dr. Dre’s connection with Apple goes way back:

Dr. Dre working at Apple? Now that’s some California love from Diego to the Bay.