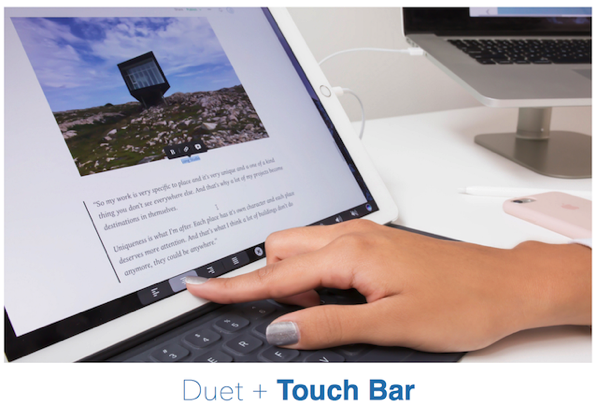 Popular display app Duet, that has been developed by former Apple engineers and can turn your iPhone or iPad into an extra display for your Mac via the Lightning USB cable, has just been updated with a great new feature, that lets you turn your iPad into a Touch Bar for just about any Mac.

All you need to do is connect your iPad to a Mac computer running Sierra 10.12.2 via the Lightning cable, and enable the feature in Duet’s menu bar settings.

With touch bar, you can use app specific shortcuts, customized for the task at hand.

And with today’s launch, we are also adding iPad keyboard support for both Mac + PC.

The new feature requires the latest desktop + iOS versions of Duet as well as macOS 10.12.2 or later. So as long as you meet the requirements below, you should have no problem getting set up.

To grab the latest version of Duet with Touch Bar support, use the following App Store link:

[caption id="attachment_389903" align="aligncenter" width="1146"] Image: Uber[/caption] Uber today announced the launch of UberX Share in Toronto, Vancouver, and Montreal, bringing shared rides back to these cities after UberPool was discontinued in 2020 due to the COVID-19 pandemic. "Shared rides have long been a rider favourite, from the spontaneous singalongs to meeting new friends and other...
Nehal Malik
14 mins ago