Toronto-based Ecobee is rolling out a new software update for the ecobee SmartThermostat that enables on-device Siri voice control and AirPlay 2 audio streaming. 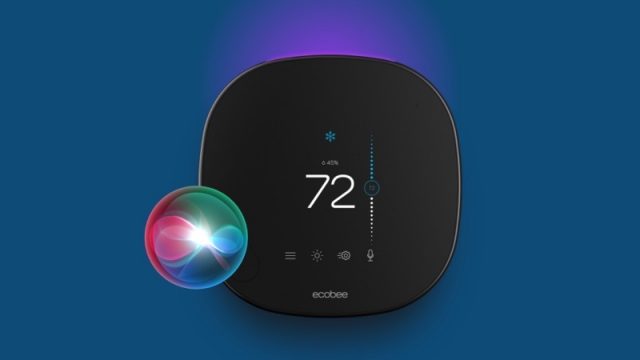 Ecobee announced plans back in June to add Siri to its SmartThermostat with Voice Control. On Tuesday, the smart home company officially launched Siri support for the flagship smart thermostat.

“We’re excited that customers will be able to talk to Siri directly from ecobee’s SmartThermostat with voice control, offering Apple customers a more seamless experience throughout the home. With every advancement to our products, we hope to make our customers’ lives better, with devices that bring even more comfort and convenience to each day. This new integration brings that promise to life by opening up new ways for our customers to control their home with our SmartThermostat,” said Stuart Lombard, ecobee Founder and CEO.

Siri will be added to existing SmartThermostat with Voice Control models via a free software update rolling out to current users “over the next few weeks.”

Once updated, users can enable Siri for the ecobee SmartThermostat by tapping on a banner that appears in the Home app. While not explicitly mentioned by ecobee, users can also enable AirPlay 2 for the thermostat after updating. The feature — which Apple lists as a Beta, allows for wireless music streaming directly to the thermostat’s internal speaker just like other AirPlay 2 speakers.

Ecobee is known for its limited premium offering of smart thermostats and home security products. Its $249 USD SmartThermostat with Voice Control competes directly with the identically priced Nest Learning Thermostat from Google. Both models have apps, remote sensors and various smart capabilities designed to maximize your energy and money savings.