Apple published a Best of Apple TV App Store list early Wednesday morning, as spotted by Buzzfeed News. The list is rather interesting, because it contains apps picked up by the company’s editors and, for developers, offers a chance to get into the spotlight, which also means more downloads. Apple SVP of Internet software and services Eddy Cue sat down with Buzzfeed to talk about Apple TV, programming, and the Apple TV remote app.

Cue sees this first best-of list as a hint of what is to come on this freshly unveiled platform. He (and Apple) hopes to see this platform evolve the same way as the iPhone App Store did.

“We’re seeing tremendous developer interest,” Cue told BuzzFeed News. “Already we have over 2,000 apps live in the store. And on the customer side, things are going great. What we’ve found is that a little over half of transactions are coming from people upgrading from the last Apple TV and just about the other half are coming from new customers that are buying their first Apple TV.” 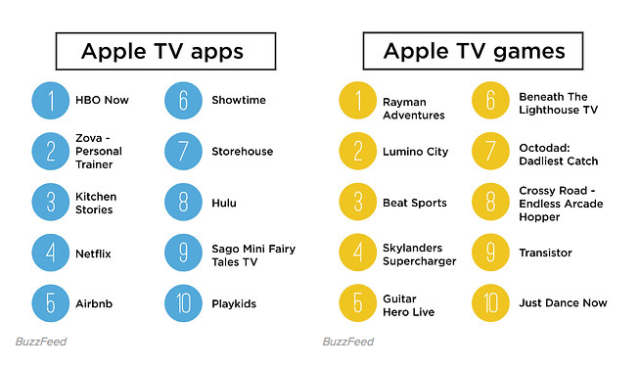 As you can see from the image inserted above, the top pick is HBO Now, but other video streaming apps have also made the top 10 list. Apple has also dedicated a curated list to gaming, which is topped by Rayman Adventures.

Considering that it has dedicated a list to gaming, it’s clear that Apple sees a lot of promise in the set-top box as a gaming platform.

“What we’re seeing with the new Apple TV is to me very similar to what happened with gaming on the iPhone,” Cue said. “When we first announced the iPhone, we didn’t tout it as a gaming device. But games became a huge part of iPhone, because it turns out that a lot more people than just hardcore gamers love games. We expanded the market. I think the vast majority of people around the world probably aren’t looking to buy an Xbox or PlayStation. But that doesn’t mean they don’t enjoy playing games. I think Apple TV expands the gaming market to those people.”

During the interview Cue also mentioned the new Apple TV remote app that will give users the full functionality of the Siri Remote on the iPhone.

However, the new remote app won’t be available until the first half of next year.