Enable FaceTime on iPhone 3GS with FaceIt via Cydia

Another day, and another new tweak for the iPhone 3GS. Earlier in the week we profiled how you can enable 720P HD video on your 3GS. Now, you can have a semi-FaceTime experience via a new Cydia tweak called FaceIt, from iPhoneIslam.com.

This free tweak will enable your iPhone 3GS to receive FaceTime calls and have audio only. If both parties have My3G installed, you can have free voice calls over 3G (or you can download the free NetTalk app).

Here’s how to install FaceIt to enable FaceTime on your iPhone 3GS:

As always, use with caution when it comes to these tweaks. Users are reporting of freezing issues with this, and even restores. I would wait for an update to this tweak, or just skip it.

1. Add the source http://apps.iphoneislam.com to Cydia
2. After the sources refresh, search for FaceIt and install. Reboot your 3GS.
3. Your iPhone 3GS on 4.1 will now be able to accept FaceTime calls. 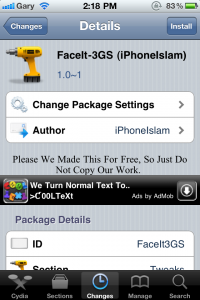 Let us know how this works for you.