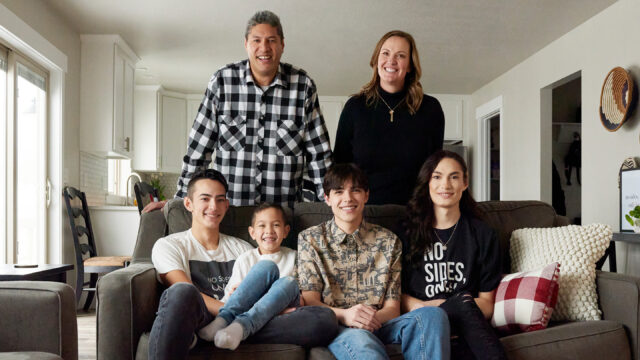 According to a new press release from the Cupertino company, Encircle, a Provo, Utah nonprofit that offers services to LGBTQ youth in the state, will expand to three more Western states thanks to an influx of funding from Apple and Ryan Smith, CEO of Qualtrics and owner of the Utah Jazz.

Encircle, a Utah-based nonprofit, was founded in 2017 to help young LGBTQ+ people and their families find support and a sense of belonging at community resource houses across the state. This month, the nonprofit launched a new campaign that leaders in business, music, and technology are rallying behind, with new donations from Apple, Qualtrics founder Ryan Smith and his wife, Ashley — who also own the Utah Jazz — and Imagine Dragons’s lead singer Dan Reynolds and his wife, musician Aja Volkman. The donations — valued at $4 million — will help kickstart Encircle’s national expansion, with new community resource houses in Utah, Idaho, Nevada, and Arizona. In addition to a $1 million contribution, Apple will be donating iPads and other products to help expand Encircle’s virtual programming and inspire new pathways for digital connection, creativity, and education.

“All people should feel safe and supported enough to be open about who they are with their community and themselves,” Apple CEO Tim Cook said in a statement Thursday. “Encircle is helping to bridge divides and bring people together — sending a powerful message that the greatest thing you can aspire to become is who you truly are.”

Encircle said the money will help its efforts to open eight new homes in Arizona, Idaho, Nevada and its home state of Utah. Apple made its investment alongside Ryan Smith and his wife, Ashley, the owners of the Utah Jazz basketball team. Imagine Dragons lead singer Dan Reynolds and his wife, musician Aja Volkman, also donated Reynolds’ childhood home to the organization. Apple will offer iPads and other products in addition to its $1 million donation.

Apple says that the charity Encircle “helps young people and their families through a number of services, including free and subsidized therapy sessions, Friendship Circles that create safe spaces and foster community, and an open-door policy that helps everyone who walks through their doors feel welcomed and accepted.”

With more of these services moving online during the pandemic, technology donations “make a meaningful difference” to Encircle as it tries to reach LGBTQ+ youth where they are.

The move marks Apple’s latest moves with social justice initiatives, which expanded amid racial strife across the US last summer. At the time, Apple said it planned to spend $100 million USD on education, economic equality and criminal justice reform. Cook said back then it was in order to “challenge the systemic barriers to opportunity and dignity that exist for communities of color, and particularly for the black community.”