Eve Extend, a new accessory unveiled today by Eve Systems, is a Bluetooth range extender that connects to Eve’s Homekit-compatible accessories beyond the Bluetooth range of the iPhone or HomeKit home hub and makes them available across the Wi-Fi network. 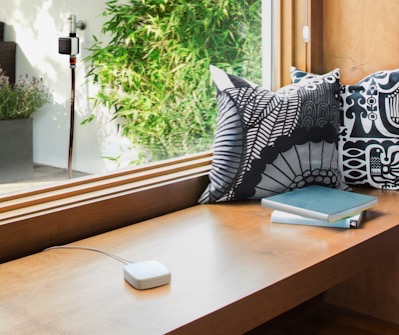 The Eve Extend can be placed anywhere within the Wi-Fi network and can be quickly added to HomeKit using the iPhone camera and the HomeKit setup code.

Once done, the Eve app lists Bluetooth accessories that are in range, assigns up to eight of them to Eve Extend, and migrates all metadata to make sure that all Siri names, scenes, and automations remain functional.

In order to extend the range of more than eight accessories, multiple Eve Extend can operate on the same network.

Whether checking basement humidity levels or activating a garden sprinkler, Eve Extend will put every Eve accessory within reach. It features support for up to eight accessories and 2.4/5 GHz Wi-Fi networks.

Eve accessories are designed to safeguard personal data. Full local access means they work seamlessly without a cloud or any registration. All collected data is fully encrypted, stored locally and never analyzed, sold or used for advertising purposes. With Eve, private data stays private. Even when accessing the home remotely.

Eve Extend will be available for preorder for USD $49.95 starting in August.