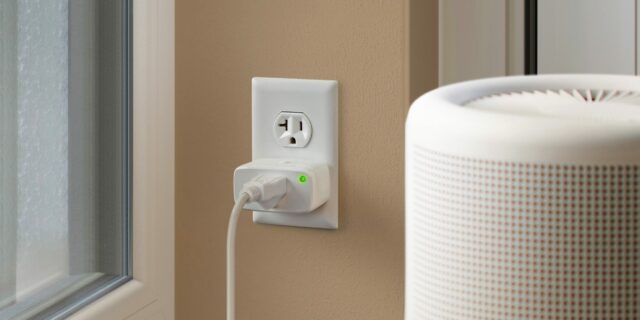 Thread is a relatively new connectivity protocol that’s built for smart home use. Thread devices create a mesh network to ensure other accessories like light bulbs or door sensors stay online and increases the speed at which commands are relayed between gadgets. Apple’s HomePod Mini is the first border router that’s widely available to consumers.

“Smart, sleek and of proven quality, a Thread-enabled Eve Energy is the definitive accessory for the HomePod mini”, said Jerome Gackel, CEO of Eve Systems. “A handful of Eve Energy, added to your Home within seconds, will span an ultra-robust, ultra-responsive and ultra-efficient mesh network across your entire house – without needing a bridge.”

The new Thread-enabled Eve Weather keeps tabs on temperature, humidity, and barometric pressure both indoors and out with IPX3 water-resistance. Eve Weather will be available at various retailers starting on March 25th for $89.95 CAD.

The new generation of Eve Energy retains the same slim single outlet design and energy monitoring capabilities as the original and will hit shelves on April 6th in Canada for $49.95 CAD.

Finally, the second-generation Eve Aqua Smart Water Controller will gain Thread support via a firmware update in early April. The free update will be available through the Eve for HomeKit app, similar to an upgrade late last year that brought Thread to the latest model Eve Door and Window sensor. Eve Aqua is available now for $149.95 CAD.

Additional information about Eve’s updated HomeKit accessory lineup is available at evehome.com and on Eve’s blog.