FAA Galaxy Note 7 Warning Wipes Out $10B in Samsung Stock 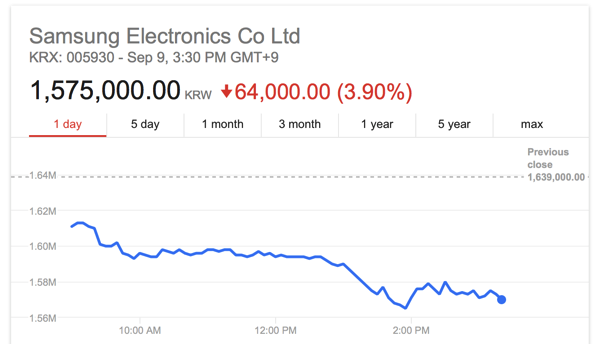 Following the Federal Aviation Administration’s official statement warning passengers not to use or charge their Galaxy Note 7s on the planes, Samsung’s shares crashed in the South Korean stock market as investors wiped more than $10 billion off the company’s market value. According to The Wall Street Journal, shares of Samsung closed at 1.575 million won ($1,432) in Seoul, which is down 3.9% from yesterday.

Samsung said Friday it was discussing the FAA move internally and declined to comment further. Samsung on Friday said “we plan to expedite new shipments of Galaxy Note 7 starting from this week in order to alleviate any safety concerns and reduce any inconvenience for our customers.”

In China, Samsung launched the Galaxy Note 7 on Sept. 1 despite the fire reports, saying batteries in phones sold there come from a different supplier. Batteries for Galaxy Note 7 phones sold in China are from Hong Kong-based Amperex Technology Ltd., a unit of Japan’s TDK Corp., one of two suppliers; the other is Samsung SDI Co.

In South Korea, where Galaxy Note 7 was launched on Aug. 19, some carrier shops said there had be no cancellations of the phone’s orders despite its being the subject of one of the largest recalls in smartphone history. “Customers have called in to ask about exchanging their devices, but we haven’t had a single cancellation yet”, said a staff member at SK Telecom Co.

Meanwhile, a 26 year old Korean school teacher told the WSJ that she is now leaning towards the iPhone 7. “Personally, getting a Galaxy Note 7 would be an easier transition for me. But I’m a bit worried it might explode”.

While the U.S. airlines have admitted that FAA’s guidelines would be tough to enforce, they are now expected to start warning passengers before boarding and during the pre-flight safety briefing not to use the phones. Some carriers, including Qantas Airways, Virgin Australia and Singapore Airlines, are already instructing against their use.