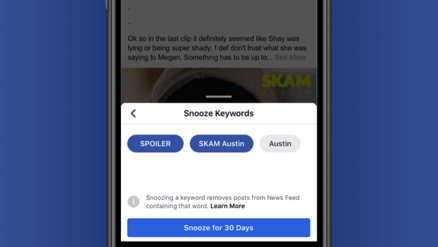 Adding to its ever-growing suite of News Feed controls, Facebook has today introduced a new ‘Keyword Snooze’ feature, that works pretty much the same way similar features like See First, Hide, Unfollow and Snooze do.

As the name suggests, the feature gives people the option to temporarily hide posts by keywords, which are pulled directly from text in that post. So if you choose to “snooze” a particular keyword, you will not see posts in your News Feed containing that exact word or phrase from any person, Page or Group for 30 days.

“Ever read a spoiler online before you’ve watched the last episode of the season? Or maybe you waited years for a movie sequel only to have your favorite blogger reveal the ending? We’ve all been there. To prevent future heartache, we’re beginning to test the next addition to our suite of News Feed controls, Keyword Snooze.

In other words, fewer spoilers.”

Let us know if the Keyword Snooze feature helps you in tailoring your Facebook News Feed experience any better.