Facebook Launches Live Audio Rooms, its Clubhouse Competitor in the US 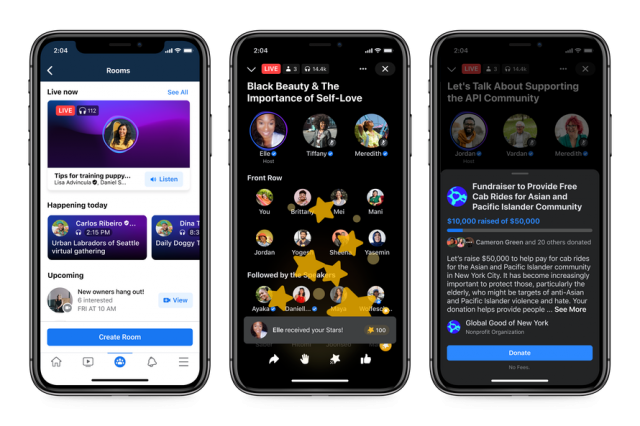 Today, Facebook launches its Clubhouse competitor feature ‘Live Audio Rooms’ in the US before a wider rollout. In a commitment to offering more audio-focused content and features, the company has launched several products for Facebook users.

Earlier this year, it was reported that Facebook was looking into developing its own Clubhouse competitor. The Clubhouse app has built quite a bit of notoriety as it is an invite-only app on iOS and Android. Audio-only chat rooms are created where users can host an assortment of sessions and other users can join in and listen or request to speak in the room as well.

Facebook’s Live Audio Rooms, which will only be accessible in the US for now, seeks to replicate the Clubhouse experience. Groups and public figures will be the first to have access to the feature, according to a report from The Verge. Those hosting Live Audio Rooms sessions will be able to record them and distribute them afterwards. Additionally, hosts will soon be able to charge access to the rooms through a subscription or a one-time fee. This will be an integrated perk of Facebook’s new Audio Creator Fund which seeks to “support emerging audio creators.”

Unlike Clubhouse, which places a firm cap of 50 on the number of speakers in each session, Facebook’s Live Audio Rooms will not impose such a limit. Other features include a notification system when friends or followers join a session. As with CLubhouse, users can utilize a ‘Raise a hand’ prompt to request to speak during a session. One notable feature that Facebook will include captions. Although Clubhouse does not offer captions, Twitter Spaces does and it appears as though Facebook has taken notice.

The host of each session will also be able to assign moderator roles and control who’s able to join. Public groups will be accessible in and out of groups. Though, private sessions will only be accessible to authorized members. On top of that, admins can select a nonprofit or fundraiser to support in their rooms for members to donate. A button will appear in chat and enable members to donate directly to those groups.

On top of, Facebook will be launching its podcast platform. Users will be able to listen to podcasts via a mini-player or the fullscreen. Naturally, full playback options will be accessible as well. Audience members will be able to search through the content creator’s Pages, where they can leave a comment or a reaction. Soon, there will also be a clip function where creators can snip out notable clips from their show and share it with their audience.

There’s no word on when Live Audio Rooms will be available to Facebook users in Canada. However, given Facebook’s ongoing commitment to audio-specific content, it’ll be worth keeping an eye on.

On Saturday evening there was a Twitter Spaces hosted by Mario Nawfal along with Kim Dotcom, which Elon Musk joined in from using Starlink on his private jet as it took off. The topic was to cover the Twitter Files shared by the social network recently, but Musk also talked about various issues, including advertising […]
Gary Ng
29 mins ago