Taking a leaf out of Twitter’s book, Facebook has today launched the ‘Polls’ feature globally on iOS, Android and the web, allowing users to add surveys and polls on any topic they like and even add GIFs and photos to highlight them, Engadget is reporting. All you need to do is open Facebook and click on the “what’s on your mind” text box, where you will see a new “Polls” icon option. 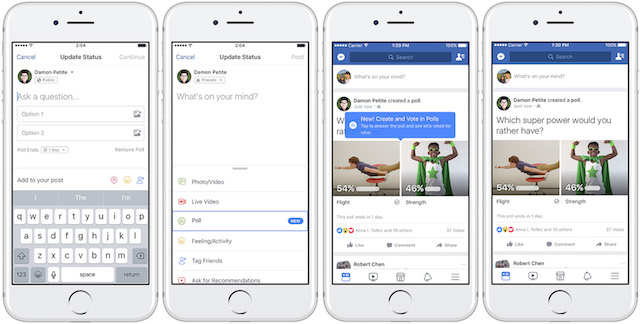 To setup a new poll, enter your question into the status box labeled “ask a question”. Although you have the option to fill in the question with no character limit, you can only add two responses, each limited to 25 characters. You can then add your own photos or GIFs to make your survey pop out a little. It’s not yet clear why Facebook is only giving two polling response options, even though Twitter allows up to four.

Facebook probably wants to the poll to be more image-oriented than Twitter’s and the layout on mobile lends itself better to two responses. It has used polls in Instagram Stories and Messenger over the last year, and recently acquired “positive polling” app “tbh.” However, “for the past several years there’s been no one way for both people and Pages to easily poll friends and fans,” it notes.

It may be a good time to setup a Facebook Poll asking, “Have you received your iPhone X yet?”.