Fairview Apple Store in Toronto Set to Expand to Over 10,000 Square Feet

The Apple Store at Fairview Mall in Toronto, Ontario, is set for expansion, according to new floorplans from mall operator Cadillac Fairview.

Floor plans show Apple is expanding into the retail space next to where it currently resides, a space at 10,287 square feet, beside Lululemon. Spot 2032A mentions “Apple – (Coming Soon)”. The expansion space is nearly double the space of the existing Apple Store, which stands at 5,829 square feet, according to current floor plans. 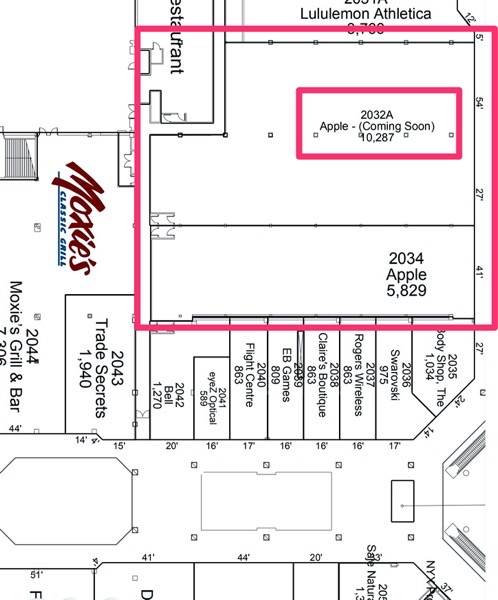 The most recent Apple Store expansion in Toronto was at the new Eaton Centre Mall location, which doubled its space and moved to the ground floor. This store has all the latest features of a modern Apple Store, including an 8K video wall and designated spaces for Today at Apple sessions.

It is presumed the new Fairview Mall Apple Store expansion will similarly gain these store features, but at this point in time, no timeline is known as to when this bigger space will open. We may hear more news in 2020 as mall expansions never really remain secret, in particular, upcoming Apple Stores.