According to a new report from My Fox Detroit, a family’s trip to Canada became pretty expensive because their son watched videos online and unknowingly racked up thousands of dollars in data charges. In an interview, Mike Domzalksi said:

“It was an innocent trip. We had never been to Toronto. It was something different.”

Domzalksi’s cell phone bill for the month of April came with a charge of $17,476.99. His 11-year old son was using his iPad to pass the time. The iPad was tethered to Domzalksi’s work phone. 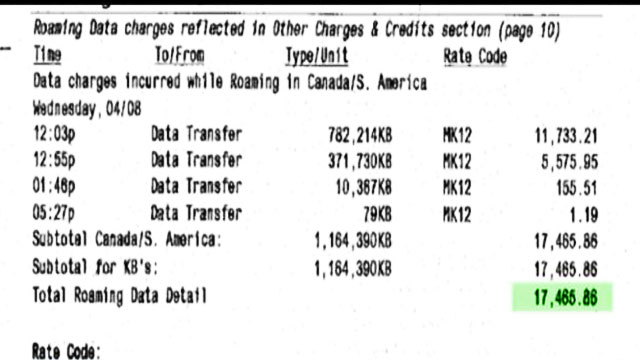 His son was watching YouTube videos in the United States and Domzalksi said that once they crossed the border he had no signal. Domzalksi was charged $11,733 for the first hour of international roaming and nearly $17,500 before AT&T cut it off five hours later.

“For $17,000 he never even saw anything,” Domzalski said. “The screen went blank and there was no connection for the whole time we were getting billed.”

An AT&T spokesperson responded with the following statement:

“Because the data was downloaded outside of the U.S., International rates apply.  In  this case it was more than five hours of continuous data usage.  We encourage people to enroll in our international plan.”

“Make sure your phones are set up properly and your iPad. Because AT&T will get you if you don’t do your homework and you will end up with a bill like I got.”

AT&T says that once a customer passes the Canadian border, a third-party carrier takes over and all billing issues are out of their hands. It is still unclear whether Domzalski will have to pay the full price for that bill, but Fox has reached out to AT&T and Domzalski’s boss for more information.