California-based, Chinese-funded startup Faraday Future has introduced its very first production car at the Consumer Electronics Show (CES) in Las Vegas, Nevada, according to a new report from Reuters. 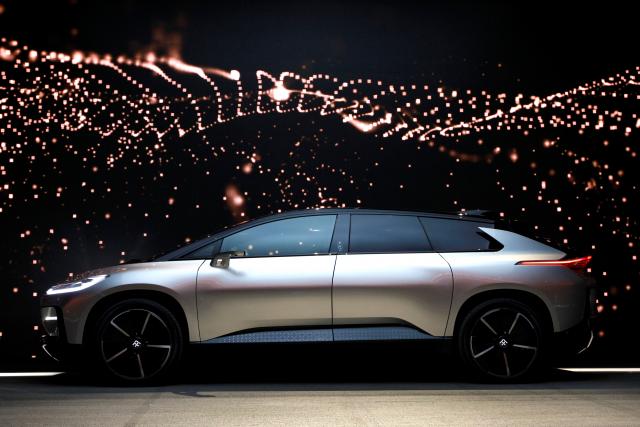 A Faraday Future FF 91 electric car is displayed on stage during an unveiling event at CES in Las Vegas, Nevada January 3, 2017. REUTERS/Steve Marcus

Named the FF91, the close-to-production prototype takes the form of an aerodynamic crossover with a cutting-edge design characterized by smooth, simple lines and LED light bars on both ends. A LiDAR sensor located right below the windshield and two additional sensors neatly integrated into the roof hint at the FF91’s autonomous capabilities.

Building upon their variable platform architecture (VPA) system, which was first shown at the CES 2016 with their ‘FFZERO1’ concept car, Faraday Future’s FF91 supercar enhances the flexible powertrain to merge the chassis and body into a single form. This monocoque structure provides improved vehicle rigidity, safety, and handling, and also supports the all-wheel drive system that offers greater traction, control, and precise power distribution.

Furthermore, the VPA houses the advanced battery technology, which includes a 130 kWh battery that achieves a range of 378 miles, and can recharge at an astonishingly fast speed of more than 500 miles per hour.

The FF91 is a high-end luxury car, so the cabin was developed around the rear passengers. The NASA-inspired rear seats offer industry-leading reclining angles, and the occupants can tap the windows to automatically dim them when additional privacy is required. The infotainment system was developed jointly with China’s LeEco.

Faraday Future’s first car is brimming with futuristic features like a camera built into the B-pillar on the driver’s side. The camera uses facial recognition technology to unlock the car and open the door when the user approaches the door, eliminating the need for a key. It also offers best-in-class high-speed internet, even when it’s traveling at freeway speeds.

Buyers who want to be among the first to take delivery of the FF91 can visit Faraday Future’s website and place a refundable $5,000 deposit. In March, the first 300 reservation holders will be given the chance to upgrade to a launch model named Alliance Edition.

Pricing information hasn’t been revealed yet. However, an earlier report claims the model will retail between $150,000 and $200,000 when production begins in 2018. Of course, whether or not Faraday Future can keep its promises largely depends on its financial situation.

Check out a video of the vehicle below.

WhatsApp has finally introduced a new feature that makes it easier to message yourself, by allowing you to send notes, reminders, and shopping lists to yourself for easy access (via TechCrunch). The feature called ‘Message Yourself’ is set to reach all iPhone and Android users in the coming weeks. The feature was previously being tested by select beta users,...
Usman Qureshi
9 mins ago

Apple has shared a handy new tutorial on its YouTube support channel, detailing how iOS 16 lets you use a Memoji sticker as your profile picture in Contacts. You can easily create a Memoji in iOS to match your personality and mood, and then send it in Messages and FaceTime. With a compatible iPhone or iPad...
Usman Qureshi
23 mins ago