Facebook is adding tighter integrations between Instagram and Messenger as part of the company’s years-long goal to rebuild its core services around encryption and privacy, reads a new press release from the social network. 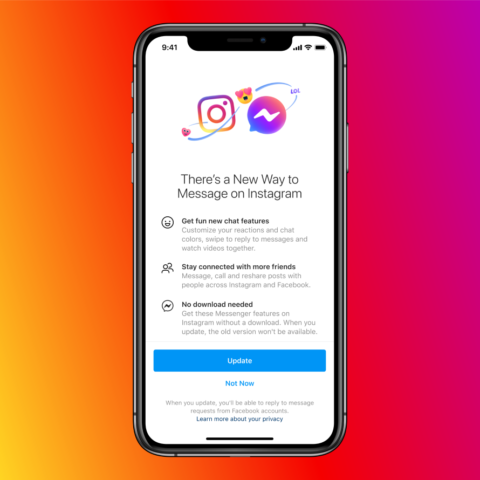 The social media giant said Wednesday that it will begin rolling out new functionality that more tightly connects Instagram and Messenger.

“With this update, it will be even easier to stay connected without thinking about which app to use to reach your friends and family,” wrote Instagram head Adam Mosseri and Stan Chudnovsky, vice president of Messenger.

The most notable change is that communications on the Messenger app can now be sent to a person on Instagram, without the sender actually needing to download the Instagram app, and vice versa. Users can control where they receive messages and calls, whether that’s through chats, message requests or not at all.

Meanwhile, an expanded set of privacy tools will allow users to manage where message requests are sent and to report abusive or suspicious activity. Users can also report full conversations in addition to single messages on Instagram, and receive proactive blocking suggestions across Instagram and Messenger, based on accounts that have already been blocked elsewhere, Facebook said.

Users who do not want cross-app messaging between Instagram and Messenger will be able to disable it. If they do so, their friends and other users will be unable to message them across apps.

Additionally on Wednesday, Facebook said users will be able to message each other in “vanish mode,” which deletes a conversation after a user exits the message. This allows users to have more private conversations without leaving a digital trail behind.

The new updates puts Facebook closer to some of its some of its goals outlined last year by CEO Mark Zuckerberg, who said wants his services to be more focused on privacy and interoperability.