According to a new report from The Information, Fitbit is said to be closing in on a deal to acquire smartwatch maker Pebble:

Fitbit, the leader in the fitness band market, is near a deal to acquire smartwatch maker Pebble, according to three people briefed on the deal.

The price couldn’t be learned but it is thought to be for a small amount. Pebble had been looking to sell, one of the people said. There have been signs over the past year or so that Pebble was facing financial challenges. Earlier this year it reportedly laid off about a quarter of its workforce. 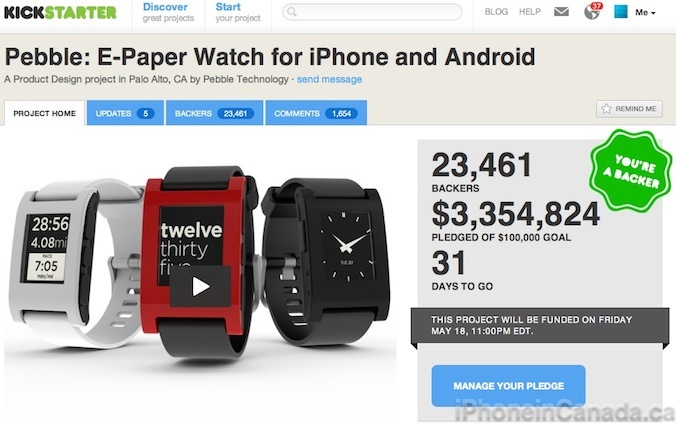 Pebble, which has its roots on Kickstarter, was co-founded by Canadian Eric Migicovsky. The smartwatch was seen as a pioneer in the wearables space, as its 2012 Kickstarter campaign saw over 23,000 backers, pledging $3.3 million USD, a record as the most funded project ever at the time.

However, as other companies such as Fitbit surged ahead of Pebble, including the Apple Watch, the market remains a tough one to crack. Back in March of this year, Pebble reportedly laid off a quarter of its workforce, a sign the company was bleeding or struggling to survive.

I don’t know how Fitbit will save itself with this acquisition—the company’s stock as of early this month was down 70% in 2016, as investors grow weary of the wearables market, which appears to be saturating or also facing tougher competition from cheaper rivals in China like Xiaomi.

We had the first Pebble and it was great—until Apple Watch arrived. Even the Pebble’s color e-ink successor, the Time, couldn’t come close to wowing consumers to jump on the wearable.

As part of its continuing production diversification initiative, Apple has ordered for a portion of its AirPods and Beats headphones to be manufactured in India. Apple has begun to double down on manufacturing its devices in India. As a way to lower its dependence on China, Apple has made an order to its suppliers to...
Steve Vegvari
26 mins ago