iPhone users lack Adobe’s Flash on the iPhone. Without Flash, the “full” internet is not quite on your iPhone just yet as streaming video websites won’t load properly (we did get a choppy version through the jailbroken app iMobileCinema).

We still don’t know when Flash will come to the iPhone. Why not? Some argue that it’s an intensive resource hog and a dying technology. However, a Flash demo on the Google Nexus One did show some promise! Adobe is in the works to bring Flash to Windows Mobile, Symbian, and the Palm Pre. What about the iPhone?

The Open Source Gordon Project Has Flash Demos on the iPhone

TUAW reported yesterday that this project will enable Flash on the iPhone–how? In the words of developer Erica Sadun:

“…to make this work, Flash developers will need to encapsulate the SWF into an HTML wrapper, importing the Gordon JavaScript source and then loading the swf, as shown here.”

For the non-developers out there, that probably doesn’t mean much. For us iPhone users, this means that we could expect some more Flash developments coming our way, that doesn’t involve Adobe. 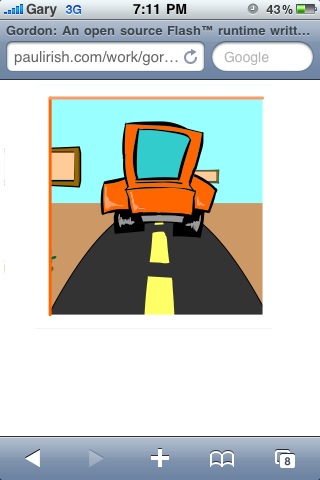 Click here on your iPhone to view the Flash Gordon demo. They actually work pretty well!