Apple announced third party keyboard support for iOS 8 at WWDC 2014, which will allow keyboards from the likes of Swiftkey, Swype and Fleksy. The latter has now teased what their keyboard looks like via Twitter—check it out below (via TNW):

Fleksy is already running on iOS 8! Register for the beta at http://t.co/fhkQWDzXJO. Follow us for updates. pic.twitter.com/u6uWqAJ6Jn 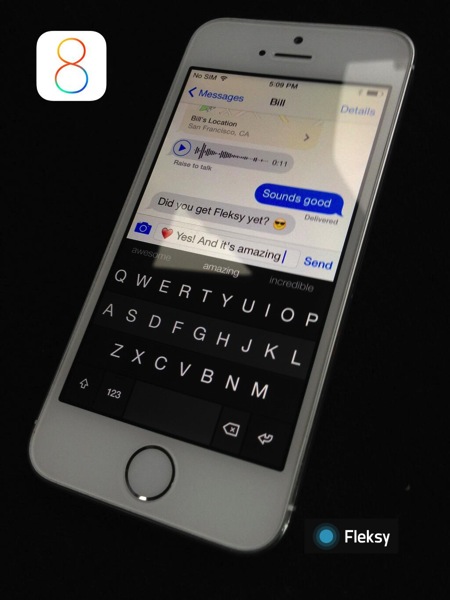 The screenshot above is missing the Siri dictation key and looks like the emoji keyboard isn’t enabled. Nevertheless, it’s an exciting time for iOS users as these third party keyboards would probably work well—on a possible larger iPhone screen.

Fleksy previously announced they would be the first company to be active on iOS 8 with a third party keyboard, saying:

As the first keyboard company to be active on iOS, and one of the most active even before today’s announcements, we can’t hide our excitement for today’s news that Apple will allow third party keyboards to be used systemwide on iOS 8. We will, of course, be part of this.

Back in February of this year, Fleksy launched its SDK publicly for all iOS developers to insert their keyboard into their apps.