AppleInsider today has the rundown on an interesting insight into the original development of the iPhone through the eyes of Bob Borchers, a former Apple Product Manager and engineer who, in a speaking engagement at a California school said: 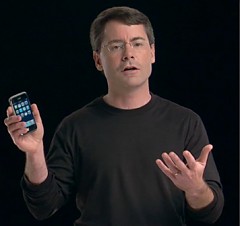 “What’s interesting is that the challenge Steve laid out for us when we created the iPhone wasn’t to make a touch-screen device that would play apps and do all of this stuff.”

Borcher delivered a number of interesting pieces of information in his lecture, such as the fact that the original iPhone almost shipped with a plastic touchscreen until Jobs’ interjection that the plastic was susceptible to scratching in a users pocket. A comment that resulted in the team having Corning salvage their Gorilla Glass product to be a part of the iPhone.

What’s most interesting is how Jobs really defined a feeling as opposed to a device. Almost as though his goal was to create a meaningful relationship between a user and their device, not just a simple device alone. Brocher said:

“His [charge] was simple. He wanted to create the first phone that people would fall in love with. That’s what he told us.”

Apple clearly makes some products we lust for, and you see this every time there is a product launch. Spend the extra time and effort to design and produce the best device the first time around, and you’ll get a legion of loyal followers.

Amid the tools used by archaeologists for centuries i.e. trowels, buckets, brushes, and pickaxes, there’s a new piece of equipment, the iPad Pro, as highlighted by Apple in a new feature. “iPad is the perfect archaeology machine,” says Tulane University professor Dr. Allison Emmerson. who was part of the team that pioneered its use to...
Usman Qureshi
3 mins ago

Apple’s Stage Manager multitasking feature in iPadOS 16 is only for tablets with the company’s M1 chip, but that is now changing. According to Engadget, Apple told the publication Stage Manager is now expanding to older iPad Pro 3rd gen and 4th gen models when iPadOS 16 is released later this year. M1 iPad Pro […]
Gary Ng
47 mins ago