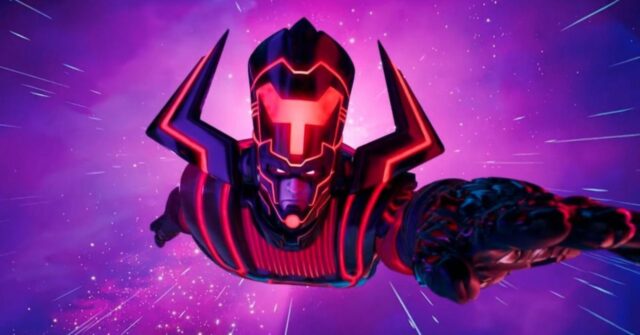 Fortnite concluded its latest season with yet another live event taking place in-game. Season four was the Marvel-centric Nexus War, which ended with Galactus rearing his ugly head to the island. It resulted in Fortnite‘s biggest event to date, with Epic Games confirming that it shattered previous event records for concurrent players and viewers.

In a Tweet, Epic Games confirmed that 15.3 million players logged into their Epic Games account and united to defeat the Marvel villain. Epic also confirmed that between YouTube and Twitch, 3.4 million viewers tuned in from the sidelines. Previously, Fortnite‘s prior record belonged to the in-game Travis Scott performance. In April, Travis Scott held his Astronomical concert event and saw 12.3 million concurrent players. Before that, Mashmellow’s performance had the record with 10.7 million players.

Fortnite‘s Galactus event saw players get behind the wheel of the Battle Bus loaded with explosives. As players navigated the trenches of Galactus’ arm while fending off enemy drones, Marvel heroes came in to assist. It culminated in Galactus being stopped. Afterwards, Fortnite was taken offline to prepare for the new season.

Today, Fortnite Chapter 2 Season 5 kicks off with Zero Point. The basis of the season involves hunters from different realities, including Star Wars’ The Mandalorian and Baby Yoda, banding together to stop The Loop. Season 5 also brings new locations to the Fortnite map, new weapons, and a new quest structure. While many of the characters introduced this season are original, the inclusion of The Mandalorian may tease that other licenced characters may join the fold throughout the season.

Twitter on Friday confirmed a December 2021 security breach that stole data from more than 5.4 million user accounts using a zero-day exploit — reports BleepingComputer. The hack exploited a vulnerability in the mechanism that Twitter lets users link email addresses and phone numbers to their accounts. Threat actors were able to submit an email...
Nehal Malik
9 hours ago