In an interesting turn of events not necessarily in the favour of Sharp, Foxconn has agreed to take over the struggling Japanese manufacturer for roughly $3.5 billion. That’s $2.5 billion short of its initial offering (via the Wall Street Journal).

The deal marks an end of months of negotiations and a victory for Foxconn, which has been looking for expansion opportunities: By acquiring Sharp, Foxconn, Apple’s iPhone display manufacturer, aims to solidify its (already solid) presence in Apple’s supply chain by stepping into the display manufacturing industry, components which are said to be the most expensive in mobile handsets.

Foxconn’s offer was weighed against that of Innovation Network Corp. of Japan. As previously reported, the offer was originally much higher, but at the last minute the talks hit a roadblock and Foxconn asked for more time to reconsider its bid. 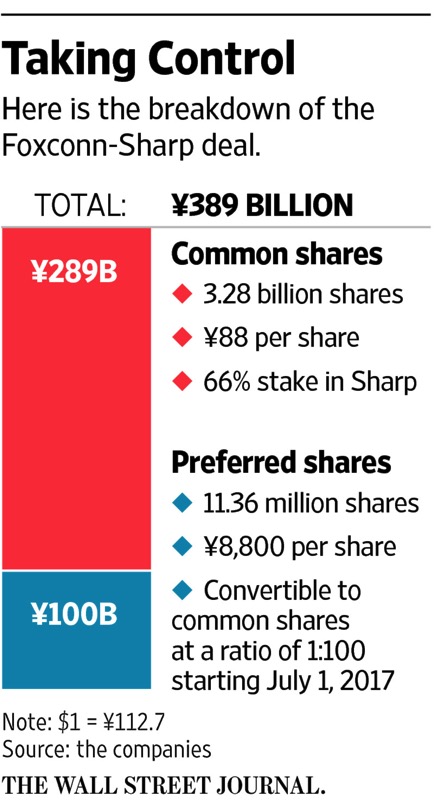 Finally, Foxconn presented its revised terms, which were accepted by Sharp’s board of directors: The struggling display manufacturer will issue new shares to Foxconn in exchange for an infusion of 389 billion Japanese yen, much lower than the initial 489 billion yen, acquiring a 66% stake in Sharp.

“We have much that we want to achieve and I am confident that we will unlock Sharp’s true potential and together reach great heights,” Foxconn Chairman Terry Gou said in a statement Wednesday.

Foxconn plans to invest in Sharp to grow its screen production capacity, including investing in OLED display technology, since Apple is rumoured to be using the technology in future iPhones, according to people familiar with the matter.