Apple’s biggest assembly partner, Foxconn, has ambitious plans for the future: It is reportedly in preliminary talks to build a factory that would manufacture high-end screens for smartphones, reports the Wall Street Journal.

The investment could reach as much as $5.7 billion, according to people familiar with the matter, making it Foxconn’s biggest direct investment to date in high-end parts manufacturing. At this moment, it is unclear if Apple or Foxconn’s other manufacturing partners have approached the company with investment plans.

Foxconn, formally known as Hon Hai Precision Industry Co. , is discussing a possible investment with the government of Zhengzhou, about 750 kilometers south of Beijing, according to people familiar with the talks. The two sides are discussing terms such as how to divide the investment, which could reach as much as 35 billion yuan ($5.7 billion), the people said.

In addition to being Apple’s assembly partner, Foxconn has been manufacturing some iPhone components, such as metal casings and cables, but mobile displays have higher margins, although they are more challenging to make. 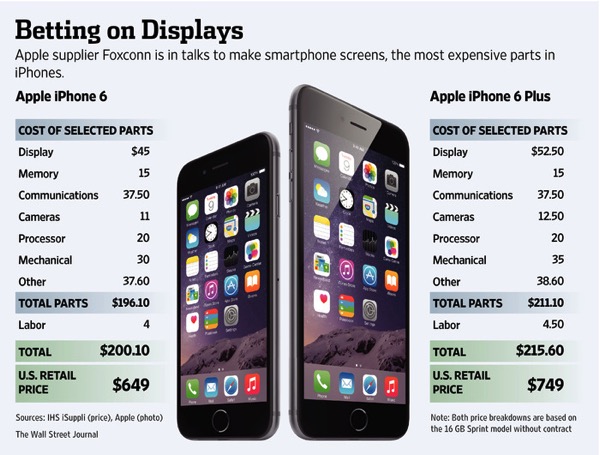 “Foxconn hopes to capture the growing demand for high-resolution, energy-efficient displays and supply Apple and other smartphone makers in the next few years,” said a person familiar with the situation.

It is an open “secret” that Foxconn is looking for other revenue streams alongside Apple, so this would be a logical step to take in the light of growing iPhone sales.

Actually, Foxconn’s Chairman, Terry Gou, had already acquired a 50% stake in a Sharp display factory in Japan two years ago, at the same time Foxconn agreed to buy a 10% stake in the same company. Other notable investments related to its future plans are an 11% stake in Innolux and an undisclosed stake in Century Technology (Shenzhen) Co. Innolux. The latter makes displays for phones, laptops, and monitors, and supplies them to HP, Dell, and Lenovo.