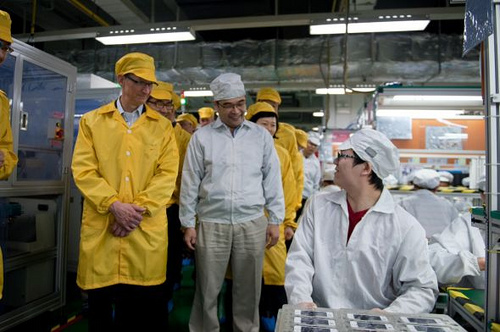 Apple and Foxconn have worked hard over the 2012 year to improve the working conditions of its factories. They began earlier this year by raising salaries and cutting overtime hours. Oddly enough, many workers were frustrated with their overtime being cut, mainly because the money they earn is barely enough to purchase their essential needs.

This time around, the Zhengzhou Foxconn plant has received the increased wage treatment. Bloomberg has the report:

Monthly salaries for entry-level employees at the factory in Zhengzhou were raised starting Aug. 1 to 1,800 yuan ($283) from 1,550  yuan ($243), the Taipei-based company said today in an e- mail to Bloomberg News. Probation, after which workers get a higher base salary, was cut to three months from six months, it said.

A report earlier this year stated the Zhengzhou plant is responsible for 70 percent of the iPhone’s production. Each day the plant manufactures 200,000 iPhones, with a future goal of 400,000 per day. This is all completed in an 8-hour minimum workday with two 15 minute breaks and a 50 minute lunch break.

Workers in the past have expressed quitting their jobs if they don’t receive an upgrade in pay. That’s why Apple and Foxconn agreed to split the costs of improving working conditions in the plant.

The pay raise comes promptly after the FLA reported Foxconn was ahead of schedule for improving working conditions. All changes related to “immediate health and safety measures” have been completed.