Huawei outsold Apple’s iPhones in the first quarter of this year, seizing the Cupertino company’s second-place spot in a tightening smartphone market dominated by Samsung.

According to a new report from market research firm Canalys, Apple posted quarterly revenue of $58 billion USD thanks largely in part to its core iPhone business making up over 53 percent of this figure. These numbers are a noticeable dip year-over-year and saw Apple giving a lot more attention to the services division making an all-time high revenue of $11.5 billion USD for the company:

Apple had a challenging first quarter as shipments dropped to 36.4 million units representing a staggering 30.2% decline from last year. The iPhone struggled to win over consumers in most major markets as competitors continue to eat away at Apple’s market share. Price cuts in China throughout the quarter along with favorable trade-in deals in many markets were still not enough to encourage consumers to upgrade. Combine this with the fact that most competitors will shortly launch 5G phones and new foldable devices, the iPhone could face a difficult remainder of the year. Despite the lackluster quarter, Apple’s strong installed base along with its recent agreement with Qualcomm will be viewed as the light at the end of the tunnel heading into 2020 for the Cupertino-based giant.

Apple’s global smartphone shipments were down 30.2 percent, from 52.2 million iPhones shipped in the first quarter of last year. This decline led to Apple giving up its number two worldwide smartphone vendor spot to Chinese firm Huawei. 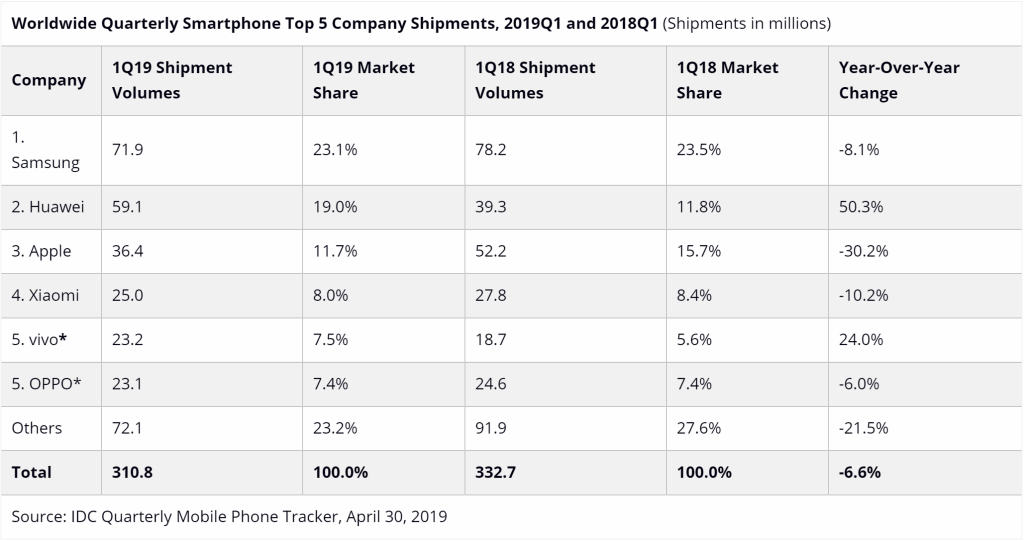 Huawei dominated the Chinese smartphone market in the first three months of 2019, taking a record 34 percent share as rivals Oppo, Vivo, Xiaomi, and Apple all struggled, reads the report. It was the only major smartphone maker that managed to grow in China’s declining market, and it did so by a huge amount.

“This new ranking of Samsung, Huawei, and Apple is very likely what we’ll see when 2019 is all said and done,” IDC Program Vice President Ryan Reith said in the report.

One of the most significant driving forces behind Huawei’s gains is the Chinese market, where it has continued to expand to a record 34% of all shipments, even amid a recent decline. Just over one in three phones purchased in China last year was made by Huawei.

An overall slowdown in the high-end smartphone market has been seen as a symptom of people waiting longer to upgrade to new models and a lack of the kind of captivating innovation that inspires them to do just that.