Google’s Material Theme Expands to Gmail for iOS and Android

Earlier this month, Google started rolling out its Material Design update for Google Docs, Sheets, Slides, and Sites and now, it is expanding it to Gmail apps for iOS and Android. According to VentureBeat, Google will be rolling out the previously teased Gmail for mobile Material update “in the coming weeks” for both smartphones and tablets. 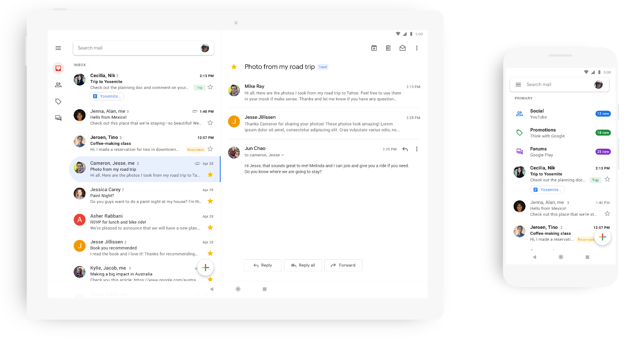 Looking at the new design side-by-side, one can immediately notice the red bar at the top has been replaced by a giant search box. The user’s profile picture is also now located on the right-hand side in the main screen instead of the navigation drawer.

Users can now also quickly tap to view attachments such as photos and documents, without having to open an email or scroll through conversations. Furthermore, switching between multiple Gmail accounts is now a lot easier and can be done by tapping the profile picture in the main screen.

Google says it will be updating the rest of its G Suite mobile apps with a similar redesign later this year as well.