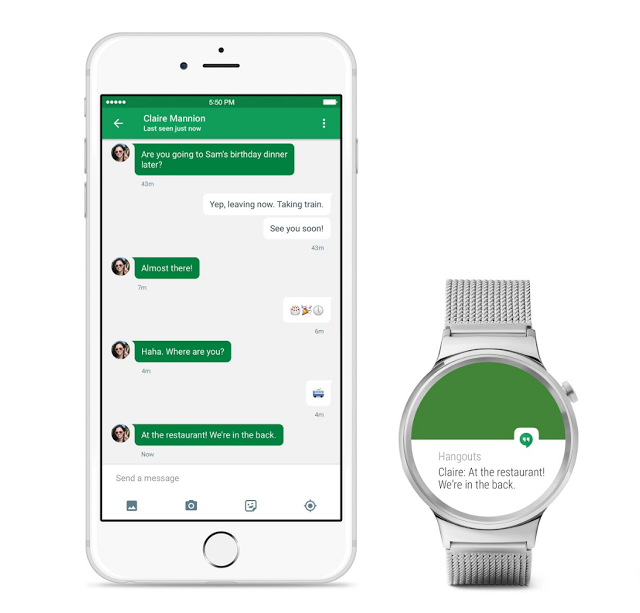 Google has announced that, starting today, Android Wear watches will be compatible with the iPhone 5, 5c, 6, and 6 Plus running iOS 8.2 or later. To control your Android smartwatch from your iPhone you will need to download the Android Wear iOS app from the App Store today.

As a first step, the app only works with the LG Watch Urbane, which kind of limits its usability, but Google says all future Android Wear watches will also support the iOS app, including devices released by Huawei, Asus, and Motorola.

While Google wasn’t able to go as deep into iOS as Apple, the app does provide some features:

– Get your info at a glance: Check important info like phone calls, messages, and notifications from your favorite apps. Android Wear features always-on displays, so you’ll never have to move your wrist to wake up your watch.
– Follow your fitness: Set fitness goals, and get daily and weekly views of your progress. Your watch automatically tracks walking and running, and even measures your heart rate.
– Save time with smart help: Receive timely tips like when to leave for appointments, current traffic info, and flight status. Just say “Ok Google” to ask questions like “Is it going to rain in London tomorrow?” or create to-dos with “Remind me to pack an umbrella.”

The Verge visited Google’s headquarters to find out more about Android Wear for iOS. As it turns out, the app allows Android smartwatch owners much more than Pebble does, so they are one step ahead from the start.

What they found during testing is that notifications from the iPhone are mirrored on Android wear, you get Google Now cards, you can select from a variety of watch faces, and there are a handful of native apps on the watch you can use such as a Weather app and a Translate app. Most importantly, you can get rich notifications from a small set of Google apps, such as Gmail and Calendar.

Following the release of iOS 16.2, Apple has limited the “Everyone” option in AirDrop to 10 minutes on iPhones for everyone, after which the receiving setting automatically reverts back to “Contacts Only” (via TechCrunch). Last month, Apple rolled out this restriction after applying the iOS 16.1.1 update exclusively in China, noting that the feature improves...
Usman Qureshi
19 mins ago

Apple has today highlighted how the company and its employees support organizations and communities around the world through volunteering, donations, and learning programs. Since its inception 11 years ago, Apple’s Employee Giving program has raised over $880 million dollars for almost 44,000 organizations globally. That includes the work of more than 76,000 employees who have...
Usman Qureshi
54 mins ago