Google Assistant for iOS Gets Support for Siri Shortcuts [u] 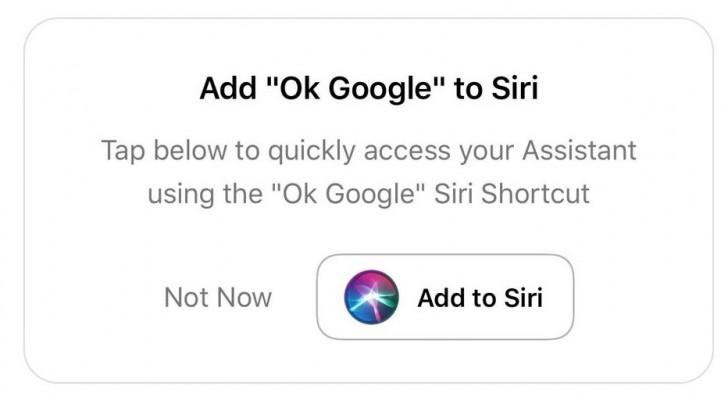 According to a new report from The Verge, Google recently released a tool that takes advantage of Apple’s new Siri Shortcuts to let users access its smart Google Assistant instead of Siri. But, hilariously, the method requires you to ask Siri to call up Google Assistant. In other words, you call one just to talk to the other.

Google is making use of Siri Shortcuts to bring an almost handsfree and native Assistant experience to iPhone, something which it has been offering on Android devices for years now. Google Assistant is unarguably smarter and more feature rich than Siri but it always felt crippled on an iPhone due to various platform limitations. Using Siri Shortcuts, Google is at least removing one such limitation.

Once you update the Google Assistant app from iOS App Store, open the app on your iPhone. You will automatically see a card prompting you to add an “OK Google” Siri Shortcut. Tap on the “Add to Siri” button and then proceed to record the voice phrase that you want to use to trigger Google Assistant. You can use “OK Google” or “Hey Google” or any other voice phrase you want. Additionally, support for Siri Shortcuts also lets you talk to Assistant handsfree on an unlocked device by uttering the same command (if that’s the one you pick).

The process is more complex than usual because it requires several intermediate steps until Google Assistant begins to interpret what the user says. However, it is the only viable method given the restrictions that iOS and Apple impose on application developers.

You can also set up Siri Shortcuts for phrases you frequently use with Assistant, come up with a custom voice command for a single smart home action, trigger Google Assistant smart home routines inside of Siri, explains The Verge. “Like saying ‘Goodnight Google’ to Siri could open Assistant and run a routine like turning off all your lights and locking the door,” added the report.

So, you’ll end up saying “Hey Siri, OK Google,” but that’s the price you pay for Google’s AI smarts on the iPhone.