Less than four months ago, Google Latitude was finally released for iPhone users. Although we didn’t end up with a standalone app, the Latitude web-app does a great job, all things considering. You can see live traffic, get directions, check out satellite view, and more.

Our Google overlords are always working hard to make things better for us. Yesterday they announced that Latitude will now include Location History and Alerts. What is the purpose of these new features you ask? Let’s take a quick gander from the Google Mobile blog:

Get alerted when your Latitude friends are nearby. Alerts only trigger when: 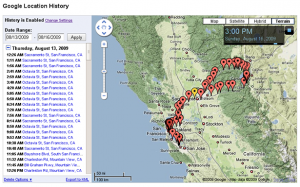 How much information are you willing to divulge to Google? Detailed location history can come in handy when you’re trying to remember where you were last week when you woke up half naked in a roadside ditch after a drunken stupor. Aside from that, it might be fun to stalk your friends. Location History and Alerts is an opt-in feature, so you must enable it for it to work.