Google Play Sale: Season One of ‘The Walking Dead’ for $0.99

Google Play has a sale right now on the entire first season of AMC’s hit show, The Walking Dead (in HD) available for just $0.99 CAD. 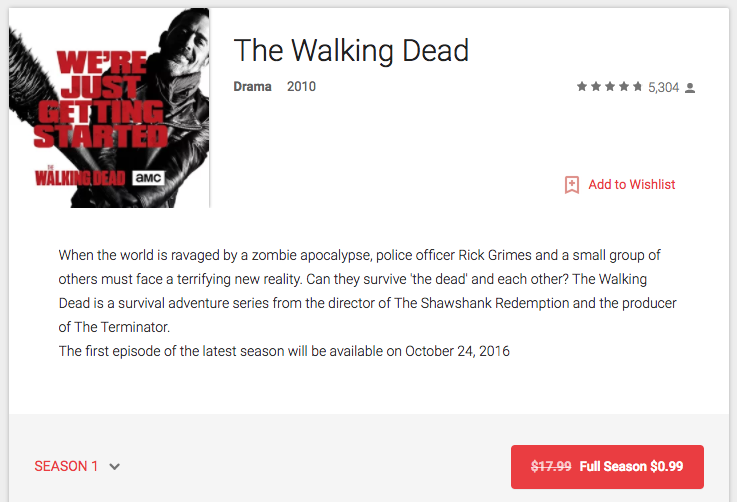 The season normally is $17.99 CAD, but right now you can get it for a buck. This is handy if you’re looking to watch the show offline or want to add it to your TV show collection. If you have an existing Google Play Music subscription, you save an additional 10% off.

Right now, the six-episode first season of The Walking Dead is also available in iTunes, but it’s $9.99.

iPhone and iPad users can watch media purchased from Google Play via the Google Play Movies & TV iOS app, which syncs to your Google Play account. Media can be streamed to your TV via AirPlay or Google Chromecast.

The sale on the first season looks to be a promo to highlight the show, ahead of the premiere of its seventh season, set for Sunday, October 23rd on AMC. The show has been renewed for season 8, set to debut in late 2017.

Decent deal. I stopped watching the show just after season four—should I start again? It just got too boring.

Apple’s Stage Manager multitasking feature in iPadOS 16 is only for tablets with the company’s M1 chip, but that is now changing. According to Engadget, Apple told the publication Stage Manager is now expanding to older iPad Pro 3rd gen and 4th gen models when iPadOS 16 is released later this year. M1 iPad Pro […]
Gary Ng
30 mins ago