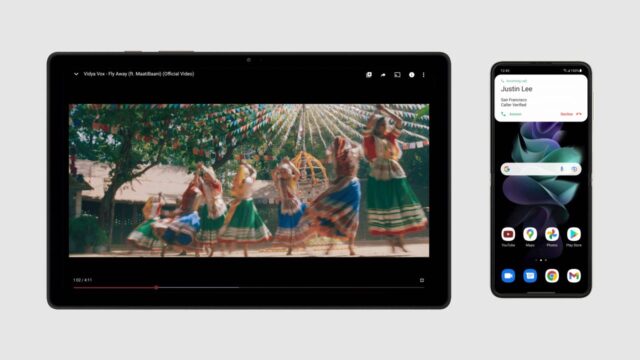 Google on Wednesday announced a new feature for Android and ChromeOS that will allow Bluetooth-enabled headphones to switch automatically between devices as needed, much like Apple’s AirPods, which can seamlessly jump from the audio from a movie being played on a Mac to an iPhone when there’s an incoming call and more.

“To amplify your visual and audio experiences, your devices should instinctively know which of them you want to use and when,” said Google. The feature will intelligently determine which of your devices you need to be listening to, and switch audio accordingly.

“So if you’re wearing headphones to watch a movie on your Android tablet and you receive a phone call, the movie will pause and the headphone audio will automatically switch to your Android phone and then switch back to the movie when you’re done,” Google explained.

Alongside automatic audio switching, Google took another page from Apple’s book and announced spatial audio for headsets that support it.

“Spatial audio on your headsets will make you feel like you’re really there by adapting the sound based on your head movements, positioning the audio in the space all around you,” said Google.

Auto-switching and spatial audio will be available “in the next few months” on supported headphones.

Both features were part of Google’s showcase for CES 2022, which focused heavily on multi-device support and increased synergy between Android phones and tablets, Chromebooks, and even Windows PCs.

Other reveals included improvements to Fast Pair that will make pairing devices across Android and ChromeOS more seamless, new features for Phone Hub, digital car key functionality, a feature that will let users unlock their Chromebooks and Android devices with their paired Wear OS smartwatch (much like Apple does with the Apple Watch), and more.