GT Advanced shares reached their highest level ever at $17.15 per stock on September 8, 2014, just a day before Apple announced the iPhone 6 and iPhone 6 Plus. Since the CEO of the company knew that on September 9 all rumours regarding the sapphire iPhone would be crushed, he took the opportunity and cashed in. He sold more than 9,000 shares of GT stock, receiving $160,000 in cash, reports the WSJ.

He sold the shares at an average price of $17.38, but the next day, right after Apple announced the new devices, GT Advanced’s shares dropped 13%, to below $15, and yesterday the company filed for Chapter 11 bankruptcy protection. 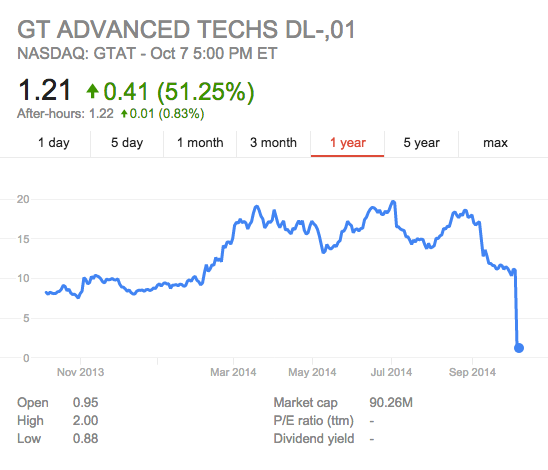 Looking at the past 12 months of GT Advanced’s stock price, we find that its value had more than doubled, as investors were positive that a partnership with Apple would “deliver big rewards for the company.”

In a filing, GT said Gutierrez’s share sale was part of a pre-arranged plan put in place on March 14, 2014. But there was no obvious pattern to his sales.

In May, June and July, Gutierrez sold shares within the first three days of the month. But then he didn’t sell additional shares until Sept. 8, two days after he received 15,902 previously restricted shares. (Gutierrez forfeited the remaining 6,670 shares to cover tax obligations.)

In reality, the only one to gain from this partnership was Gutierrez, who cashed in more than $10 million by selling nearly 700,000 shares since February.