Taxi App Hailo to Pull Out of Toronto, Montreal, Exit North America [u]

London-based taxi app Hailo is exiting from North America, due to increased competition from competitors such as Uber and Lyft. Jay Bregman, the company’s co-founder and co-chief executive will also be leaving the company to pursue “entrepreneurial endeavours”, reports the Financial Times:

The three-year-old group, which partners with incumbent taxi services, said it was forced to abandon the US and Canada because it was impossible to be profitable. It will focus instead on expanding into new cities across Europe and Asia, where regulators appear to be more willing to protect the traditional industry.

Despite receiving almost $77 million in venture capital investment, Hailo’s operations will close in Washington, Chicago, Boston plus Canadian cities Toronto and Montreal. One-tenth of their global workforce, or about 20 staff in the US and Canada will most likely be laid off.

Executive Tom Barr said a price war between major competitors is forcing the company out of North America:

“When we moved into North America, we had two entrenched first-mover competitors,” he said. “They are in a price war. It’s not that we aren’t growing there, but the profitability of the market and the type of environment [that other taxi-app companies] are setting up – both on the driver and passenger side – ceased to make sense to us.”

Hailo has taxis in 30 cities and is popular in London, Madrid, Barcelona and Dublin, with over 1.4 million registered users around the globe. Revenues for 2013 were over $100 million, but the battle in the US and Canada remains difficult, despite Hailo partnering with local taxi companies in its approach. 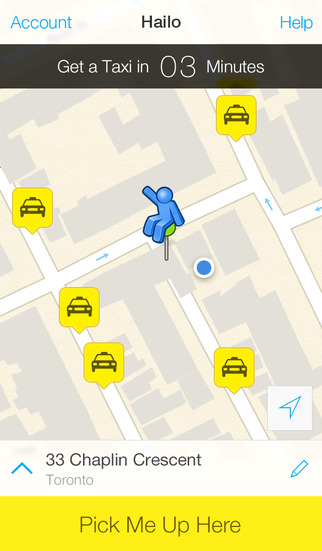 Hailo’s taxi service went live in Toronto back in the fall of 2012. The company’s locations in Toronto and Montreal had also been partnering with Molson Coors the past couple years to give away $1 million in taxi credits during the holidays.

Anyone been using Hailo in Toronto or Montreal? What did you think of the service?

Update: Hailo Toronto could continue as “a licensing deal is in the works”, the company tells TechCrunch:

“Hailo Toronto remains in operation and will continue to provide service to passengers and drivers,” Toronto operation lead Justin Raymond told me. “A licensing deal is in the works.”

“As it stand, the Toronto team definitely wants it to continue, and we’re committed to that,” Raymond said in an interview. “There just need to be some details worked out with the Hailo parent company to keep it alive and make it thrive in Toronto as it has been.”

Update 2: Hailo has again responded to TechCrunch to say the Toronto licensing deal is not happening. Hailo is definitely dead.

DoorDash Canada has today released its 2022 End of Year Trends Report revealing the best and quirkiest food and ordering trends to come out this year. DoorDash saw a variety of food preferences in 2022, from the healthiest eaters and coffee lovers to good pet parents, and the biggest spenders. Torontonians tuned out to be...
Usman Qureshi
6 mins ago