Hailo iPhone Taxi Cab Service Up and Running in Toronto

We briefly covered in August how the taxi company Hailo received its licensing to start operating in Toronto. Well, the service (originally started in the UK) went live yesterday and people of Toronto have yet another taxi service they can hail from their iPhone.

“Technology is driving the change that the taxi industry so desperately needs. Our mission at Hailo is simple,” says Hailo Canada President Justin Raymond. “We want to make the taxi experience better and easier for both passengers and drivers. By offering an easier, faster and simply better taxi experience, we believe Hailo is going to fundamentally change the way that people move around the city.” 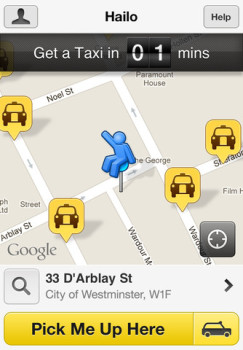 Hailo’s claim is that you can get a cab in just ‘two taps’ and also pay effortlessly without taking out your credit card. Also, when you hail a cab you immediately see who your cabbie is with a picture and their online rating, leading to safer cab rides.

For cab drivers, Hailo allows them to keep ’85 cents on the dollar’ in their pocket by avoiding dispatch fees. The service also allows drivers to work smarter as fares will come to them, along with an online support system to share traffic information with other colleagues. Not only that, drivers will know in advance who their passengers are, which will help avoid fare skipping.

The CBC notes Hailo’s other online taxi competitor in Toronto, Uber, operates unlicensed in the city:

Uber, however, contends that it is a technology company, and said that the drivers using the Uber app are fully licensed and insured.

“We’ve presented our point of view to the city,” said Andrew Macdonald, Uber Toronto’s general manager. “And I think they want to be technology-friendly.”

Have you tried Hailo or Uber’s taxi service in Toronto? What do you think?