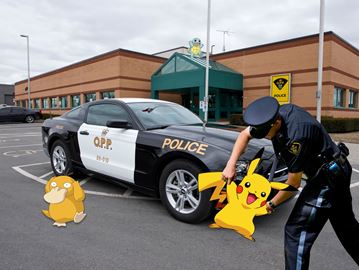 Halton police have started warning residents of their city about the risks of playing Pokemon Go.

Over the past week, various reports have surfaced about people getting injured, and in some cases breaking the law, as they play the game. Halton Police have been posting on social media this week to warn users about the dangers of playing the game:

Dont become a #PokemonGo #DistractedDrivingZombie . The game has no place in the hands of a driver. $490 ticket ^MRT pic.twitter.com/WNtH6KRk6K

The augmented reality game, which overlays images of Pokemon characters over real life objects, has become a worldwide sensation in less than a week. The game is still not officially available in Canada, but this hasn’t stopped Canadians from grabbing their smartphones and giving it a try.