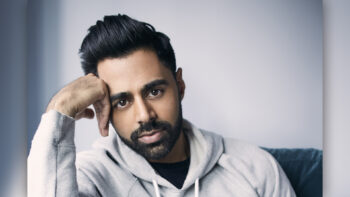 The Morning Show is a drama series that dissects the world of morning news in the U.S., showcasing the lives of the people involved in bringing you your daily fix of current affairs. The series follows two complicated and convincingly human women as they face crisis after crisis in their personal and professional lives, and try to understand and cut through power dynamics in the workplace.

Minhaj has been tapped to play Eric — a charismatic up-and-comer who joins the onscreen morning show team during the second season. The accomplished comic and writer will be joining a star-studded cast that includes the likes of Jennifer Aniston and Reese Witherspoon (who are also executive producers for the series), The Office sensation Steve Carrell, Billy Crudup, Mark Duplass, and more.

This role will be the highest-profile acting gig Minhaj has taken on to date, and will also be the former The Daily Show correspondent’s debut in the drama genre.

The Apple TV+ drama has won a total of eight Primetime Emmy Awards, with Aniston also winning a SAG Award for Outstanding Performance by a Female Actor in a Drama Series. The rest of the cast boasts an assortment of awards for their respective performances as well.

With production facing delays due to the COVID-19 pandemic, season 2 of The Morning Show is expected to start streaming on Apple TV+ early 2021.

During the 'Made by Google' launch event earlier today, Google unveiled an entirely new addition to its Pixel portfolio — Pixel Watch — and teased yet another one by previewing its first Android tablet, the Pixel Tablet, on stage. Pixel Tablet brings Google's Pixel experience to a much larger screen (although Google didn't say exactly...
Nehal Malik
2 mins ago