Here’s How To Bring the ‘.com’ Button Back On iOS 7 Keyboard [Tutorial]

With the introduction of iOS 7’s revamped keyboard, Apple has removed the ‘.com’ button that was previously available by default on the iOS keyboard, allowing users to to type “.com” with a single key press when entering web addresses. Fortunately, there’s a simple way to type ‘.com’ with one-and-a-half key presses (via Kirkville). 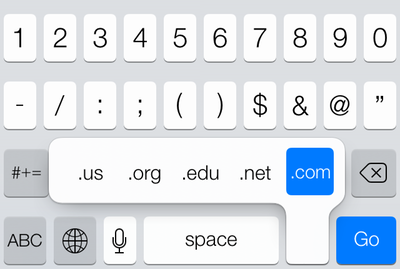 While Apple may never bring the dedicated ‘.com’ button back to iOS keyboard, here’s what you can do instead.

When you’re in a web browser, and want to type .com, just tap and hold the . button to the right of the space bar

You’ll see a popup menu which lets you choose from a number of top-level domains (shown above).